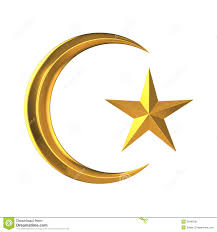 THE STAR AND THE CRESCENT (part one)

Have you ever wondered what significant role the star and the crescent play in phenomenal symbolism? Cain probably used it. I want to believe he did use it. Nimrod, most definitely made it a cosmic symbol of esotericism.

The Bible teaches that Cain, in Genesis 4:16, left the presence of the LORD God, took a dwelling place in the east of Eden. Why go to the east? Does the Bible not say, in 1Timothy 6:16, of God to be “dwelling in the light which no man can approach unto…” If Satan has to disciple man, it is imperative for him to share a certain enlightenment. Knowledge is of light but Cain had just lost the Light, having left the presence of God. The east produces the rising sun. Lucifer pushed him away from the Creator so that Cain will have to worship the creature. The word ‘east’ in Genesis 4:16 is qidmah (kid-maw’), meaning: ‘forward, front, east, antiquity’. Qidmah is a feminine noun. In the documentation of primordial idolatrous Arabic mythology, the moon is a god ilah. Satan could not get the original woman to congregate in his assemblage – the church! He made use of the available Cain – a male! Satan also established the deceitful symbolism of the sun. God already has the woman and He is the first to go to the east in Genesis 2:8; and this east albeit is of the same definition, it happens to be a masculine noun word of qedem (keh’-dem).

Qidmah is the Hebrew for the ‘east’ in Genesis 2:14. The significance of its feminine gender as a river is seen in the fact that it carries God’s message -the gospel to other place- by the Church. Water is emblematic of human beings and also the Word of God. In Genesis 3:14 it is qedem, where the angel of the Lord is barring all falsehood forms of religious activities. God had established His Church in the pristine family.

Why is the star and the crescent so religiously prominent? Every star, elementary science will teach you, is another sun! The crescent is actually the fullness of the moon as the days roll by.

The esoteric portrayal of the sun dates back to Nimrodic days of Genesis 10:8-9; v.8 “And Cush begat Nimrod: he began to be a mighty one in the earth. V.9 He was a mighty hunter before the LORD: wherefore it is said, Even as Nimrod the mighty hunter before the LORD”. The prepositional ‘before’, panıym (paw-neem’): ‘the face (as the part that turns); used in a great variety of applications (figuratively) speaks of impudence’. Nimrod, historically is bel or baal, meaning lord of Babel. In his kingdom he was worshipped as the sun god. His wife Semiramis was the moon goddess. Ra is the Egyptian sun god, the same as the original baal of Nimrod. Egypt happens to be the next world power after Nimrod’s rule of the entire earth a la the eschatological coming antichrist. Cain built the first city. Nimrod built the second city, historically. Idolatrous Egypt, as the world super power, was next in line of propagation of sun and moon worship. Check out the cities of the world historically and behold the extent of Satanic worship.

The Satanic star & crescent has found its way into Catholicism, esoteric societies and Islam.

Baal worship spread globally. Sunday was set aside for sun or Baal worship. Where does Monday come from? Semiramis, Nimrod’s wife, of course, and no doubt the reason why one comes after the other in the days of the week! Thursday pays obeisance to Thor, god of thunder, replicated in all the continents of the globe. Saturn, known to be a hidden name of Satan, is the seventh day of Saturday. Jehovah commanded to be worshipped on Sabbath, the 7th and the last day of the week. This is how Satanic subtlety has been employed in the religious activity of mankind. Satan has never been in want of an earthly agent. He derailed our pristine parents spiritually. In the light of, “Father, forgive them for they know not…,” I can say that Cain was conscripted, with all unequivocalness. What the Devil did with Nimrod he introduced to the Pharaoh and all consequent leaders of the world.

Satan even owns the money!

Satan had to resort to the employment of what I call Religious Alternatives to cover up the deviousness of being worshipped. Seeing that Adam’s Eve would not follow him to establish his religion he had no choice but to take Cain, a male, as opposed to a woman (the genesis of homosexuality). Christ is the True Light (Genesis 1:3; John 1:4-9). Lucifer needed to prove to have illumination so he claimed the sun (ever heard of Illuminati?). Lucifer died spiritually, losing the lively Word of God. He cannot use the Word, so, symbolism (i.e. heavenly bodies, animals, incantations and signals) characterizes his activities. An alternative god is idolatrous.

What is the crescent doing on the mosque?

The minaret, from where the muezzin calls for each of the five daily prayers, has the design (it will be quite plausible to argue) of the star and the crescent of Baal worship. An Egyptian temple parades Isis, Horus and Ra with an inevitable sun disc and the crescent. Where do the countries of the world get the star and crescent design on their flags and coat of arms? The purported ‘star of David’ is actually a Kabbalistic symbolism. The good King David of Israel never, for once, delved into any esoteric fraternity. According to Collins Dictionary, kabbala is an ancient Jewish mystical tradition based on an esoteric interpretation of the Old Testament. It comes from Hebrew qabbālāh: ‘tradition, what is received’, from qābal: ‘to receive’. Kabbala, most glaringly, was never received from Jehovah. (…to be continued…)

Next Post
THE STAR AND THE CRESCENT (part two)