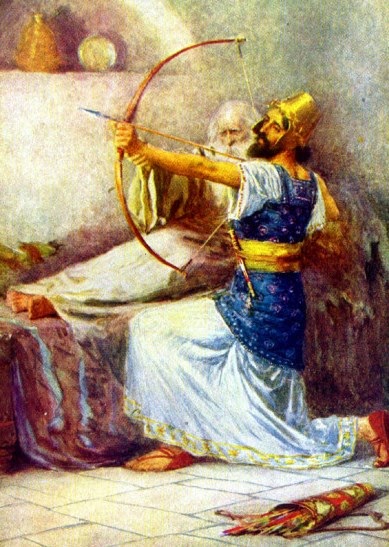 It will not stop confounding the simple mind of the one who is untutored in scripture. Putting myself in King Joash’s shoes I could be angry with the dying Elisha, even as revered as his prophetic office is. I will vehemently query this outburst from the anointed lips of the prophet with, “After all you did not tell me the more shots the better for my warring successes”.

Our spiritual realism is in possession of the governing influence over the physical manifestation of our stance. The spiritual walk of King Joash was via the route of demonic gods of wicked Satanism. This is the accounting reason for the failure of Joash. God’s enemy will never want anyone going through any preparatory walk that meets Jehovah’s standard of success. Joash knew the Elohim of Israel but he would rather worship Baal. He, like so many of humans, bothered not to ask Jesus when it came to the ideal deity of worship; but faced with destructive warring enemy, Joash knew the route to the God of Israel. Insincerity! How can we be fraught with spiritual insincerity and expect an excellent trial grade?

The spirit of negligence rode on the back of king Joash, veering him off tracks of God’s word. Carelessness! When we keep ourselves away from the rejuvenating word of God we definitely miss the glorious mark of distinction, creating a certain unpreparedness on our part. “…meditate therein day and night, that thou mayest observe to do according to all that is written therein:”, is what the scripture teaches and concludes with, “for then thou shalt make thy way prosperous, and then thou shalt have good success” of Joshua 1:8. Negligence to God’s instructions is the preamble to failure. Joash complied with the social phenomenon. Zeitgeist (an adherence to inimical norm)! Strict care is of utmost importance in our choice of earthly norm in order not to perform too poorly when God’s trial does eventually come. A pitiable result sheet becomes a toga of ignominy, offering devastating strides of languorousness. If the prophet had told the king, “The number of shots represents your life’s victory”, he would have asked for all of the arrows Israeli armament could boast of. Just imagine, all he needed achieve a pass mark was only two easy shots! This, unfortunately, is how close to success most beings have come.

Why did the king of Israel founder? The answer is not difficult to arrive at. He was simply unprepared. He thought it was business as usual. He could do as he wished, he believed, forgetting that his spiritual stand was undergoing trial, and also little did he know that he was dealing with the thrice holy Jehovah. This God demands holy perfection, unlike other gods of idolatry, headed by the sacrilegious Lucifer. 1Peter 1:16, “Because it is written, Be ye holy; for I am holy”. The word ‘holy’ is hagios (hag’-ee-os) meaning: ‘1. Sacred 2. (physically) pure 3. (morally) blameless 4. (religious, ceremonially) consecrated’. Hagios, simply put, is ‘to be set apart’: to the glory of the LORD. Genesis 17:1 says, “And when Abram was ninety years old and nine, the LORD appeared to Abram, and said unto him, I [am] the Almighty God; walk before me, and be thou perfect”. ‘Walk’ is the Hebrew word halak (haw-lak’) ‘to walk (in a great variety of applications, literally and figuratively)’. Halak speaks of ‘lifestyle’. Tamiym (taw-meem’) is the word for ‘perfect’ and it means: ‘1. (literally, figuratively or morally) entire 2. (also, as noun) integrity, truth’. God wants your integrity before Him to be ‘complete’, which is the root word of tamiym.

King Joash was careless with God’s business. Many other people are guilty of spiritual ineptitude in their dealings with the Lord. God is a serious Personage; He does not joke with the matters of His kingdom. The LORD God is an astute Businessman. You must do His business according to the revealed word of the principles of His business. Integrity is of utmost importance in order to be able to discomfit the enemy’s destructive appeal. God sees your heart, so, any action of infidelity causes your premature vanquishment.

We should be careful in our walk so as not to be guilty of an adherence to inimical societal norm, which was engendered by the utterance of the first woman of Eden, when she verbalized the infamy, “…neither shall ye touch it, lest ye die” of Genesis 3:3. The world had fashioned its own standard since that awful demise.

As children of God, you are the arrows He, the Lord God, shoots to discomfit His enemies. Your inability to shoot victoriously can only be your undoing. Nothing, as far as God is concerned, comes fortuitously. You work for it. There is a Divine orchestration leading to joy. There is, nonetheless, a determined, satanic plot. God has given you all you need to represent Him in victory. Amen.

You can become God’s effective arrow by praying this prayer of salvation to get born again. Say: “Dear heavenly Father, I come to You now in the name of Jesus Christ. I believe in my heart that Jesus is the Son of God. I believe that Jesus died on the cross for my sin. I believe that You raised Him from the dead. I confess with my mouth that Jesus is Lord and I receive Him now as my Lord and my Saviour. I give God all the glory. Amen!” (Concluded)