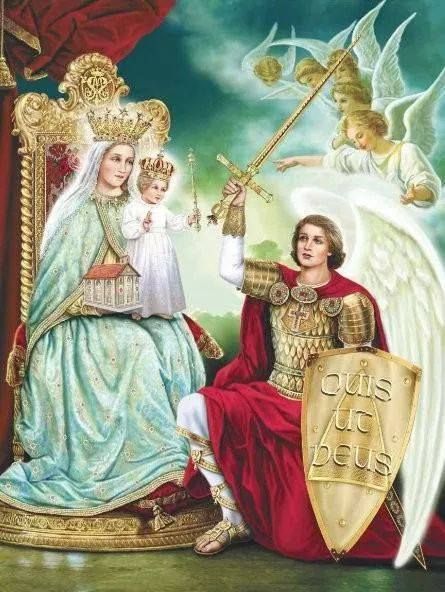 Michael kneeling before Mary and the Jesus who won’t be weaned?

(IX)         Advocate, adjutrix, mediatrix: all of these, Mary’s titles? A look at 1John 2:1 reads, “My little children, these things write I unto you, that ye sin not. And if any man sin, we have an advocate with the Father, Jesus Christ the righteous:” Jesus, ergo, is not just one of the advocates as it is vouched in 1Timothy 2:5 “For there is one God, and one mediator between God and men, the man Christ Jesus;” where the adjective ‘one’ is heis (hice) (Including the neuter [etc.] ἕν hen); a primary numeral; one.’ In this context it is the primary cardinal number one. Again, the word ‘men’ is anthrōpos (a -Greek- generic word for mankind).(Confer Romans 8:34; Hebrews 7:24, 25, & 9:24). Jesus being the only Mediator, is Mary, her mother’s Mediator; now you can understand the profundity of her Luke 1:46-55 effusion.

Cupids? Babies in heaven? What’s the triangle and halo doing on Father and Son?

It expressly and categorically states: ‘one God;’ ‘one mediator’ and not any other cardinal number. Catholicism fails, in its bid to satiate its unGodly crave, to perceive the dangerous scriptural anomaly this verse makes of the mediatrix didacticism. If the Bible says, one mediator, and Catholicism establishes another mediatrix, is the church of Papal Rome not changing the word of God to read: “…there is one God, and TWO Mediators between God and men,”? Are there any private interpretation of scripture? “Knowing this first, that no prophecy of the scripture is of any private interpretation,” of 2Peter 1:20, is the answer. A good look at the paintings sponsored by Catholicism are quite Nimro-Semiramic. Haloes, triangles, Madonna, cupids and most prominently, mother and child. To keep Semiramis, the moon goddess latreutically alive, the baby Jesus of Catholicism must not be weaned!

first—the foremost consideration in studying the word of prophecy. Laying it down as a first principle never to be lost sight of.

is—Greek, not the simple verb, to be, but to begin to be, “proves to be,” “becometh.” No prophecy is found to be the result of “private (the mere individual writer’s uninspired) interpretation” (solution), and so origination. The Greek noun epilusis, does not mean in itself origination; but that which the sacred writer could not always fully interpret, though being the speaker or writer (as 1Pe 1:10-12 implies), was plainly not of his own, but of God’s disclosure, origination, and inspiration, as Peter proceeds to add, “But holy men . . . spake (and afterwards wrote) . . . moved by the Holy Ghost”: a reason why ye should “give” all “heed” to it. The parallelism to 2Pe 1:16 shows that “private interpretation,” contrasted with “moved by the Holy Ghost,” here answers to “fables devised by (human) wisdom,” contrasted with “we were eye-witnesses of His majesty,” as attested by the “voice from God.” The words of the prophetical (and so of all) Scripture writers were not mere words of the individuals, and therefore to be interpreted by them, but of “the Holy Ghost” by whom they were “moved.” “Private” is explained, 2Pe 1:21, “by the will of man” (namely, the individual writer). In a secondary sense the text teaches also, as the word is the Holy Spirit’s, it cannot be interpreted by its readers (any more than by its writers) by their mere private human powers, but by the teaching of the Holy Ghost (Joh 16:14). “He who is the author of Scripture is its supreme interpreter” [GERHARD]. ALFORD translates, “springs not out of human interpretation,” that is, is not a prognostication made by a man knowing what he means when he utters it, but,” &c. (Joh 11:49-52). Rightly: except that the verb is rather, doth become, or prove to be. It not being of private interpretation, you must “give heed” to it, looking for the Spirit’s illumination “in your hearts.”

It is blasphemous to make Mary equal to Jesus. To so do is indicative of spiritual indigence as pertaining to scriptures. Isaiah 45:23, “I have sworn by myself, the word is gone out of my mouth in righteousness, and shall not return, That unto me every knee shall bow, every tongue shall swear.” The true Speaker calls Himself ‘LORD’ in verse 21; ‘God’ in verses 21 and 22. ‘LORD’ is the Hebrew ‘Jehovah (self-existing One).’ The first ‘God’ in verse 21 is ‘ĕlôhı̂ym (el-o-heem’): ‘divine ones,’ plural of ‘ĕlôahh, gods in the ordinary sense; but specifically used (in the plural thus, especially with the article) of the supreme God.’

The second ‘God’ in verse 21 and the ‘God’ in verse 22 is ‘êl (ale): ‘strength; as adjective mighty; especially the Almighty (but used also of any deity).’ Does this not look – ‘Jehovah’ and ‘The Almighty’– like God, the Father? But let us see what two verses say. Romans 14:11 “For it is written, As I live, saith the Lord, every knee shall bow to me, and every tongue shall confess to God.” Philippians 2:10, “That at the name of Jesus every knee should bow, of things in heaven, and things in earth, and things under the earth.” This verse makes Jesus the Jehovah of the Old Testament. He cannot hold the same office of deification with Mary, unless, of course, Catholicism will prove its proclivity to paganism.

Only the Members of the Trinity receive the genuflection of adoration. Scraping before the statue of Madonna is strictly idolatry. A word, they say, is enough for the wise. Amen!!