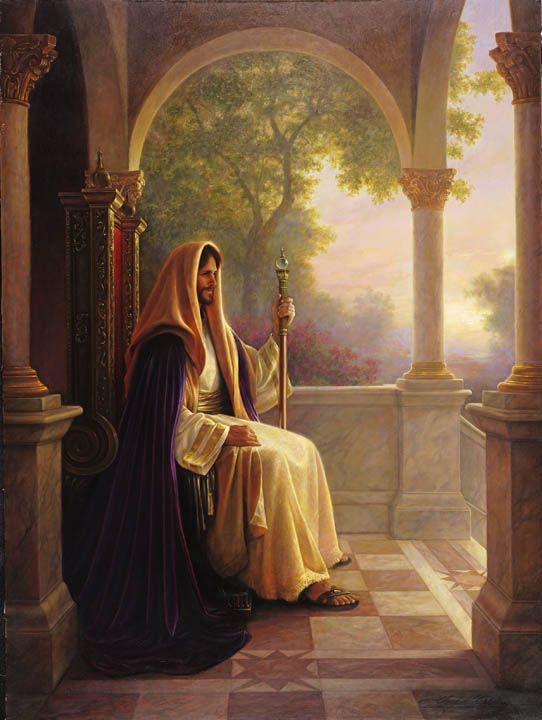 LEGALITY OF REGALITY: INSIGNIA BORNE ON HIS MAJESTIC SHOULDER

(Continued from part one…)

(2)            The word ‘government’ (of Isaiah 9:6) is miśrâh (mis-raw’) meaning: ‘rule, dominion, government, empire.’ The legality of His regality is the insignia borne on His majestic shoulder. For the caught in the web of forgetfulness, this very One is the Governor of the nations attested to in the twenty-eighth verse of the twenty second Psalm (confer Psalm 47:7-8; Daniel 7:14; Obadiah 1:21; Zechariah 14:9 & Revelation 11:15). He will rule with an iron rod. When the LORD rules, He is a Dictator, albeit, not tyranically. Eliakim or ‘elyâqı̂ym (el-yaw-keem’) which means ‘God raises, God of raising or God sets up,’ stands in the representative capacity of Christ in Isaiah 22:21-22, v.21) “And I will clothe him with thy robe, and strengthen him with thy girdle, and I will commit thy government into his hand: and he shall be a father to the inhabitants of Jerusalem, and to the house of Judah. 22) And the key of the house of David will I lay upon his shoulder; so he shall open, and none shall shut; and he shall shut, and none shall open.”

In the Book of Jeremiah 23:5, it says, ‘Behold, the days come, saith the LORD, that I will raise unto David a righteous Branch, and a King shall reign and prosper, and shall execute judgment and justice in the earth.”  Pauline 1Corinthians 15:25 has, “For he must reign, till he hath put all enemies under his feet.” Of the governmental extent of Jesus is Ephesians 1:21 “Far above all principality, and power, and might, and dominion, and every name that is named, not only in this world, but also in that which is to come:” My concluding verse of His government is Revelation 19:16, “And he hath on his vesture and on his thigh a name written, KING OF KINGS, AND.” The reign of Jesus, as scripturally seen, can only be of the Deity. Psalm 2:6-12; Psa 110:1-4; Jeremiah 23:5-6; Zechariah 6:12; Zec 6:13 & Zec 9:9-10 are for further reading.

The epithets of this Gift to humanity are absolutely of the Divinity. The first of the given Son’s name is ‘Wonderful’ and it is pele’ (peh’-leh) in the Hebrew, meaning: ‘miracle, marvel, wonder (extraordinary, hard to understand thing), wonder (of God’s acts of judgment and redemption).’ While other works of wonderment are of magical orientation, Jehovah alone performs miracles. Does history know of anyone who performed or performs more miracles than Jesus? He, it was, who went about doing good things, I mean, good things beyond human endowed capabilities.

The first inconceivable awed attention to tax man’s sight of Him was the Incarnation: 1Timothy 3:16, “And without controversy great is the mystery of godliness: God was manifest in the flesh, justified in the Spirit, seen of angels, preached unto the Gentiles, believed on in the world, received up into glory.” Hallelujah! Prophetic are Isaiah 7:14 and Luke 1:35. The prophetic parturition of Samson did reveal the awesome proclivity of this Enigmatic Visitant in Judges 13:18 “And the angel of the LORD said unto him, Why askest thou thus after my name, seeing it is secret?” In the LORD’s assuaging bid to put an end to Manoah’s curiosity, whose name in Hebrew is mânôach (maw-no’-akh) and means: “rest,” His answer to Manoah’s curiosity is hoo pailee, meaning “it is wonderful!” This is the same Person of whom the Bible says, “And Jesus went about all the cities and villages, teaching in their synagogues, and preaching the gospel of the kingdom, and healing every sickness and every disease among the people” [Matthew 9:35]. In Acts 10:38 it has it thus, “……who went about doing good, and healing all that were oppressed of the devil; for God was with him.” Amen.

Yâ‛ats (yaw-ats’) is the Hebrew for ‘Counsellor’: ‘to advise, consult, give counsel, purpose, devise, plan.’ I do not know of any angel who can make this promise to anyone as we have in Luke 21:15, “For I will give you a mouth and wisdom, which all your adversaries shall not be able to gainsay nor resist,” especially when the troth is of a distant period and in diverse locations of the world. A much older saint did spin the rhetoric Job 21:22, “Shall any teach God knowledge? seeing he judgeth those that are high.” The verb ‘teach,’ lâmad (law-mad’): ‘properly to goad, that is, (by implication) to teach (the rod being an Oriental incentive).’ God ‘judgeth,’ shâphaṭ (shaw-fat’): ‘to judge, that is, pronounce sentence (for or against); by implication to vindicate or punish; by extension to govern; passively to litigate (literally or figuratively).’ If God is the only wise One, how can Jesus be the Yâ‛ats? Is it not because of the scriptural facticity that makes Him the grand subject found in Colossians 2:3, “In whom are hid all the treasures of wisdom and knowledge?” Selah!

The KING Of Kings: Jesus

Get born again. Say this prayer, meaning it: