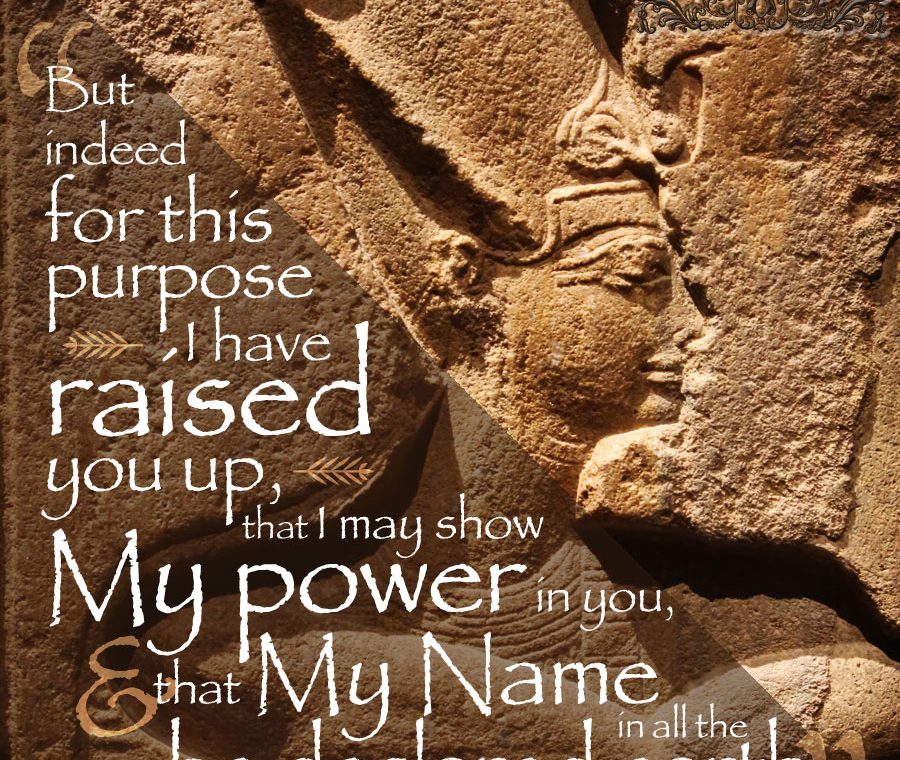 IV)         Exodus 9:14-18 “For I will at this time send all my plagues upon thine heart, and upon thy servants, and upon thy people; that thou mayest know that there is none like me in all the earth. 15) For now I will stretch out my hand, that I may smite thee and thy people with pestilence; and thou shalt be cut off from the earth. 16) And in very deed for this cause have I raised thee up, for to shew in thee my power; and that my name may be declared throughout all the earth. 17) As yet exaltest thou thyself against my people, that thou wilt not let them go? 18) Behold, to morrow about this time I will cause it to rain a very grievous hail, such as hath not been in Egypt since the foundation thereof even until now.” Ten is the number of trials. Ten horrendous plagues of national devastation were enough to bring Pharaoh to his succumbing knees. He believed he had enough gods of idolatry to gain an upper hand against the Almighty One of Israel.

Pharaoh failed like the earlier putsch (of Lucifer) and demonic attempts. Verse 16 of Exodus chapter 9, is not an upholding applause to determinism of man’s philosophical stance. God would never create anyone for destruction. Jehovah is not the Author of fatalistic proclivities. All that God wants is a broken heart. Did He not send Prophet Elijah to prophesy to king Ahab, “Behold, I will bring evil upon thee, and will take away thy posterity, and will cut off from Ahab him that pisseth against the wall, and him that is shut up and left in Israel” [1Kings 21:21]?

But Ahab’s adoption of a compunctious spirit made the same God to hold the impending annihilating curse in abeyance in 1Kings 21:27-29. “And it came to pass, when Ahab heard those words, that he rent his clothes, and put sackcloth upon his flesh, and fasted, and lay in sackcloth, and went softly. 28) And the word of the LORD came to Elijah the Tishbite, saying, 29) Seest thou how Ahab humbleth himself before me? because he humbleth himself before me, I will not bring the evil in his days: but in his son’s days will I bring the evil upon his house.” It was the same Elijah that gave king Ahab the comfy news. Jehovah is not an unforgiving God.

Achan was warned not to pilfer sacredness. Joshua 6:17-19 “And the city shall be accursed, even it, and all that are therein, to the LORD: only Rahab the harlot shall live, she and all that are with her in the house, because she hid the messengers that we sent. 18) And ye, in any wise keep yourselves from the accursed thing, lest ye make yourselves accursed, when ye take of the accursed thing, and make the camp of Israel a curse, and trouble it. 19) But all the silver, and gold, and vessels of brass and iron, are consecrated unto the LORD: they shall come into the treasury of the LORD.” Three desecrating count charge of: covetousness, disobedience and stealing from the treasury of the LORD! What impudence!? Stealing from the hand of the LORD God. Had He not warned them not to expect leniency if they should disobey the Angel of the LORD who followed them in Exodus 23:20-21?

Joshua 7:4-5,“So there went up thither of the people about three thousand men: and they fled before the men of Ai. 5) And the men of Ai smote of them about thirty and six men: for they chased them from before the gate even unto Shebarim, and smote them in the going down: wherefore the hearts of the people melted, and became as water.” They could not win this war simply because Achan, in Joshua 7:1, “took the accursed thing.” God does not support evil.

“And Joshua said, Why hast thou troubled us? the LORD shall trouble thee this day. And all Israel stoned him with stones, and burned them with fire, after they had stoned them with stones” (Joshua 7:25). God frowns at, and judges evil. His judgments arise from the laws that are duly acquainted with, by the people: for the Scripture rightly agrees that “Because the law worketh wrath: for where no law is, there is no transgression” [Romans 4:15].

If Samson had asked, God would have spared his life and restored his eye sight.

Samson and his recklessness got what he asked for. Judges 13:5 “For, lo, thou shalt conceive, and bear a son; and no razor shall come on his head: for the child shall be a Nazarite unto God from the womb: and he shall begin to deliver Israel out of the hand of the Philistines.”  There is no gainsaying the fact that Samson had the custody of this vital information. If not he would not have allowed his affection to exhibit such duncical judgment to open his heart and mouth to utter, to someone who is not just an infidel but who happened to have come from a nation nursing enmity against Israel, the words of Judges 16:17, “That he told her all his heart, and said unto her, There hath not come a razor upon mine head; for I have been a Nazarite unto God from my mother’s womb: if I be shaven, then my strength will go from me, and I shall become weak, and be like any other man.”

(…to be continued in the next part…)