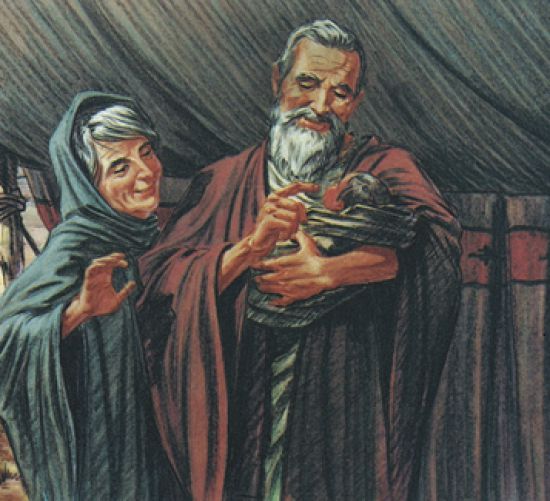 2)      In the book of Genesis 18:14 the Hebrew word dâbâr (daw-baw’) is the biblical rendition of ‘any thing’, which is not an inference to the objectivity of kinetic parameters of activities per se. It comes from its root dâbar (daw-bar’): ‘to arrange; used figuratively (of words) to speak; speech, word, speaking, thing.’ The definition of ‘any thing’, in this Scripture is: ‘speech, saying, utterance.’ It is of a matter arising from an engenderment of God’s verbal decree.

I can hear Abraham saying, almost without a syllabic twitch of his lips, “Promises and promises, yet no child!” It was easy for Sarah to do her behind the scenes giggles. “Good food has a way of making people play the role of the Divinity,” Sarah concluded. God could not be deterred, thank heavens. Jehovah was at His gentlemanly disposition as He made the epical query, “Is any thing too hard for the LORD?” And for the record, “At the time appointed I will return unto thee, according to the time of life….” So that it would be of man’s testimony concerning the beneficence of the LORD God that, “He did say so!”

Genesis 21:1-7, 1) “And the LORD visited Sarah as he had said, and the LORD did unto Sarah as he had spoken. 2) For Sarah conceived, and bare Abraham a son in his old age, at the set time of which God had spoken to him. 3) And Abraham called the name of his son that was born unto him, whom Sarah bare to him, Isaac. 4) And Abraham circumcised his son Isaac being eight days old, as God had commanded him. 5) And Abraham was an hundred years old, when his son Isaac was born unto him. 6) And Sarah said, God hath made me to laugh, so that all that hear will laugh with me. 7) And she said, Who would have said unto Abraham, that Sarah should have given children suck? for I have born him a son in his old age.”

The word ‘spoken’ in the first verse is dâbar (daw-bar’): ‘to arrange; used figuratively (of words) to speak; speech, word, speaking, thing.’ It is very important to note that the words ‘any thing’ of Genesis 18:14 and ‘spoken’ of Genesis 21:1 mean the same thing. Our business is to look into the Scriptures; get a word that answers our predicament; bind securely our faith to it; and God has just given you the desire of your heart.

Forsooth, delay is not denial!

Be wise not to drop your guard of faith. Can you afford to disappoint the LORD God? Selah!

1Samuel 1:1-7, “Now there was a certain man of Ramathaimzophim, of mount Ephraim, and his name was Elkanah, the son of Jeroham, the son of Elihu, the son of Tohu, the son of Zuph, an Ephrathite: 2) And he had two wives; the name of the one was Hannah, and the name of the other Peninnah: and Peninnah had children, but Hannah had no children. 3) And this man went up out of his city yearly to worship and to sacrifice unto the LORD of hosts in Shiloh. And the two sons of Eli, Hophni and Phinehas, the priests of the LORD, were there. 4) And when the time was that Elkanah offered, he gave to Peninnah his wife, and to all her sons and her daughters, portions: 5) But unto Hannah he gave a worthy portion; for he loved Hannah: but the LORD had shut up her womb. 6) And her adversary also provoked her sore, for to make her fret, because the LORD had shut up her womb. 7) And as he did so year by year, when she went up to the house of the LORD, so she provoked her; therefore she wept, and did not eat.”

Elkanah is the Hebraic elqânâh (el-kaw-naw’) meaning: ‘God has possessed or created.’ Why Elkanah chose to marry a second wife could not be a good excuse. The Bible says that it was God who shut his wife’s womb; it was not Hannah’s fault. Hannah means ‘grace’ which tells me that she is a type of a Christian, highly favoured to the glory of Jesus Christ.

Delay, dear, faithful Hannah, is not an empyreal denial.

Problems are meant to bring one out as gold. God wanted to lift that family of Elkanah up in a game of glory. Elkanah, the man of the home, chickened out. The kitchen became unbearably hot for his liking. If not for anything, the name of his place of abode was enough to make him believe that God would give him the fruits of the womb through none else other than Hannah, his beloved wife. The Hebrew, râmâthayim tsôphı̂ym (raw-maw-thah’-yim tso-feem’) means: “double height of the watchers”. Should this duality not double-strengthen his faith, from which it becomes a possibility to draw delight in the LORD, of whom no spoken word becomes a wonderment of an impossibility to execute?’ The world would have called him the name of unfruitfulness for just the same uncomfortable period of time his wife, Hannah, endured it. If you know the God of the Bible the way you should, you will understand that the more prayer time you spend with Him, the stronger your faith will continue to grow.