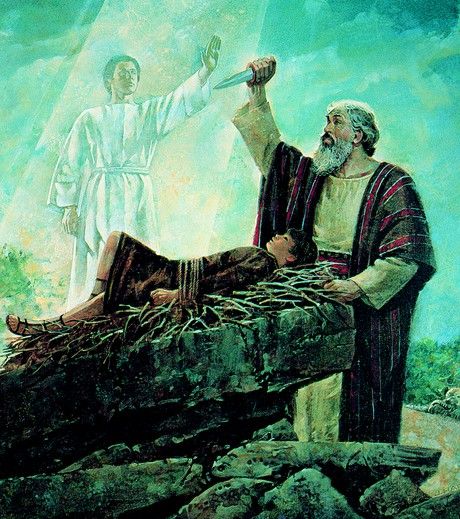 8)            Noah. Of Noah it is said, “But with thee will I establish my covenant; and thou shalt come into the ark, thou, and thy sons, and thy wife, and thy sons’ wives with thee” (Genesis 6:18). There were probably more than two million people in the world. Only eight souls, led by the patriarchal Noah were righteous enough to be saved from the impending annihilation. In a mad sinful world, Noah made a difference. He lived to please the Most High. His obedience earned him the patriarch of today’s world population.

Abraham became the father of faith. Genesis 22:1-3 “And it came to pass after these things, that God did tempt Abraham, and said unto him, Abraham: and he said, Behold, here I am. 2) And he said, Take now thy son, thine only son Isaac, whom thou lovest, and get thee into the land of Moriah; and offer him there for a burnt offering upon one of the mountains which I will tell thee of. 3) And Abraham rose up early in the morning, and saddled his ass, and took two of his young men with him, and Isaac his son, and clave the wood for the burnt offering, and rose up, and went unto the place of which God had told him.” What he did sounds stupid and callous. Faithfulness to the word of God has always made the person of faith look stupid. Human philosophy has succeeded in vitiating God’s word of instruction. Satanism.

And when Abraham passed the trial, we read from the Scripture, “And said, By myself have I sworn, saith the LORD, for because thou hast done this thing, and hast not withheld thy son, thine only son: 17) That in blessing I will bless thee, and in multiplying I will multiply thy seed as the stars of the heaven, and as the sand which is upon the sea shore; and thy seed shall possess the gate of his enemies; 18) And in thy seed shall all the nations of the earth be blessed; because thou hast obeyed my voice.” (Genesis 22:16-18). If God had to swear by His name, knowing that there is nothing by which He could swear, this is an accentuation of the act of faith.

David. Even though King Saul was very erratic and deserved to die at the hand of David whom he pursued with the wicked intent of killing without no just cause, David given the opportunity, would do no such thing – this is the difference between the one who fears God and the one who does not. 1Samuel 24:4-6 “And the men of David said unto him, Behold the day of which the LORD said unto thee, Behold, I will deliver thine enemy into thine hand, that thou mayest do to him as it shall seem good unto thee. Then David arose, and cut off the skirt of Saul’s robe privily. 5) And it came to pass afterward, that David’s heart smote him, because he had cut off Saul’s skirt. 6) And he said unto his men, The LORD forbid that I should do this thing unto my master, the LORD’S anointed, to stretch forth mine hand against him, seeing he is the anointed of the LORD.” David’s loyalty to the crown and the military head of Israel would not allow him to kill even an enemy who desperately sought after his life. But the more important reason for not wanting to end the life of Saul was the divine ministerial office King Saul held.

At another opportunity which the LORD God furnished David with is when the Bible says, “So David took the spear and the cruse of water from Saul’s bolster; and they gat them away, and no man saw it, nor knew it, neither awaked: for they were all asleep; because a deep sleep from the LORD was fallen upon them” (1Samuel 26:12). Again, against the plausibility of military advice his lieutenant offered him, David ostensibly asked himself, “What would the LORD, my God, expect me to do?” The prevalent ethical code of divine will of “The LORD forbid that I should stretch forth mine hand against the LORD’S anointed:” of verse eleven prevailed in Davidic reasoning.

None can become God’s child unless he gets born again. Soteriological establishment requires obedience to John 3:3 and submission to Romans 10:9-10 culminating in the process of the prayer involved. John 3:3 emphatically asseverates, “Jesus answered and said unto him, Verily, verily, I say unto thee, Except a man be born again, he cannot see the kingdom of God.” This is the spiritual regeneration every intelligent being of terra firma must conform to. The perfection of this new birth, midwifed by the Holy Spirit, is the prayerful rendition of Romans 10:9-10 “That if thou shalt confess with thy mouth the Lord Jesus, and shalt believe in thine heart that God hath raised him from the dead, thou shalt be saved. 10) For with the heart man believeth unto righteousness; and with the mouth confession is made unto salvation.”

The driving force of redemption is the exhibitive character of faith. Every word of the prayer of salvation otherwise called ‘sinners’ prayer’ must be accompanied by faith. “But without faith it is impossible to please him: for he that cometh to God must believe that he is, and that he is a rewarder of them that diligently seek him” (Hebrews 11:6).

The concluding part nine is here