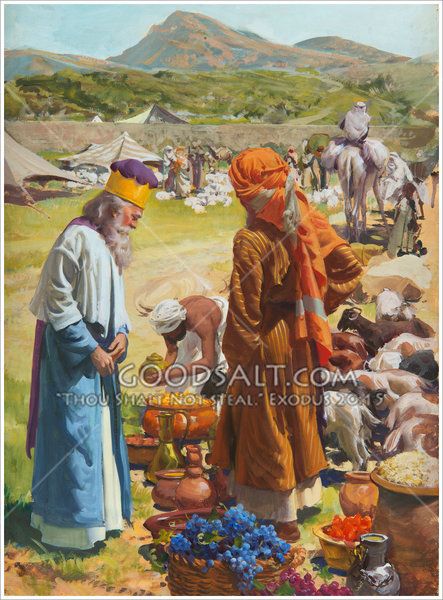 4)              When Abraham offered the first ever tithes it was in an acknowledgement that the LORD God is the Possessor of the heavens and the earth. The giving, premised on this instance, he must give it to a priest. This Melchizedek, a priest and a king, prefigured Jesus, our High Priest and King. To consummate His adumbration, Melchizedek brought wine and bread. If the tithe had served as Jesus’ adumbration, there would not have been any need to pay tithe since His emergent incarnation would have taken care of it.

JEHOVAH, Abraham understood, is the POSSESSOR of the heavens and the earth.

Abraham’s tithe is a sermon in praise of the Most High. It was a faith act, intended to keep him in riches. Christians, having received much, ought to give appreciatively more. Tithing, though not compulsory, is obligatory (akin to the half shekel expected to insure the life of an Israelite for a year –Exodus 30:11-16). Out of that which Abraham earned he took, to honour the LORD, his God, by faith. God did not thunder a threat of impoverishment to coerce father Abraham.

The man felt obliged to perform a faithful act of giving. The bread and the wine were presented to foretell the breaking of His body and the offer of His blood for our redemption. It was, therefore, apropos when at the Last Supper, the One Melchizedek prefigured, had to perform the ritual of the new covenant: the harbinger of the eternal life mystery. Amen.

This is the pedagogical significance of Paul’s Hebrews chapter seven. Verse seven says, “And without all contradiction the less is blessed of the better.” The blessed, less, being Abraham, makes Melchizedek, the blessing priest, superior in this scriptural context. If the scriptural pellucidity, as concerning Melchizedek’s role, is in a contextual adumbration of Jesus Christ, his antitypical High Priest, does it not tell us that just as Levi metaphorically paid tithes, not to the legality of the Aaronic order, Abraham actually paid it to Christ, the Eternal head of the Christian Church?!

Gave not by the legalism of Mosaic Law

Abraham was not prompted by the legalism of Mosaic Law. Abraham did not handover the tithes of his volitional drive to Aaron who, together with every priest of his progeny, did die (read verse 8). He paid it to the Melchizedek i.e. the ‘immortality’ in representation of Christ. If the appropriation of faith in Jesus is what makes one a Christian, then it is quite germane to say that Abraham’s faith in Jehovah makes him a Christian. Jesus, in Melchizedek, received the tithes from Abraham, a type of a Christian. Abraham’s tithes was not of an extraction of legality.

What can one learn from this verse, “Verily, verily, I say unto you, Except a corn of wheat fall into the ground and die, it abideth alone: but if it die, it bringeth forth much fruit” [John 12:24]? We know that Jesus was talking about Himself, but why would the seed die before it bears fruits? The death of the sown seed brings human effort to an end so that God will take the credit for its germination. The death of Jesus led to the Resurrection, which is solely of Divine operation. Is this not also of the seed of faith that we drop into the offering bag? Should you not see it well enough, let us look at another scripture.

1Corinthians 15:36-38 read, “Thou fool, that which thou sowest is not quickened, except it die: 37) And that which thou sowest, thou sowest not that body that shall be, but bare grain, it may chance of wheat, or of some other grain: 38) But God giveth it a body as it hath pleased him, and to every seed his own body.” What you give to God must die first. It must cease to be called yours before God can do something about your request. To prosper, you must give your substance, tithes inclusive. Abraham, who first gave the tithes, was being made to start the life of faith on behalf of man all over again, since we know that Adam had bungled it. He gave out of faith. Why? Christians must live all their lives in absolute faith.

Melchizedek brought the bread and wine which sealed the New Testamentary order, which came from the beneficence of the Lord Jesus. A freewill engendered another. Melchizedek brought the communion elements which did rejuvenate the communion that Christ had with the sinless Adamic family in the Garden of Eden, when He came to them every cool of the evening. Praise the Lord. Tithes, as Rev. Chris Okotie puts it, truly belongs to the Church! Amen!!