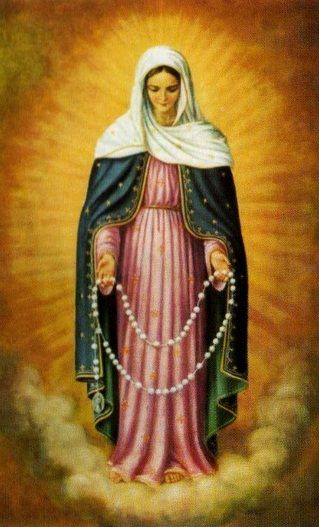 Nowhere does the Bible support the emblematic holiness of the halo

Pope Benedict XVI continued the program of redirection of the Catholic Church towards a Marian focus and stated: “Let us carry on and imitate Mary, a deeply Eucharistic soul, and our lives will become a Magnificat”. In 2008 Pope Benedict XVI introduced a Marian prayer he had composed, which referring to Mary being the Mother of all Christians stated: “you became, in a new way, the Mother of all those who receive your Son Jesus in faith and choose to follow in his footsteps…”

Quite a scatological mind of an individual it will take to disdain the faith and exemplary character of Mary, the mother of Jesus; but when one peruses the Pauline hall of faith (Hebrews chapter eleven), Mary is not accorded a mentioning, neither as the Catholicism engendered ‘mother of God.’ The Holy Spirit did not even direct Paul to do an insertion of her name somewhere in-between verses 39 & 40 to produce a couching like: “God having provided some better thing for us, through the divine matrix of Madonna of the blessed perpetuity of virginity, that they without us should not be made perfect.”  Mary, to Catholicism, would have been the co-Perfecter of the faith of Christians if Hebrews eleven has an inclusion of her name.

Guess what the halo behind Mary means? Semiramis, the moon goddess, of course!

On the day of the naming of a new baby, the Roman Catholic Church priest washes the baby’s head which, to Catholic faithful, represents the Christian baptism. Whether it is ‘baptize, baptized, baptizing,’ the Greek word of which is baptizo (bap-tid’-zo): ‘1. to immerse, submerge 2. to make whelmed or soaked (i.e. fully wet)’ or ‘baptism,’ baptisma (bap’-tis-mah): ‘immersion (technically or figuratively),’ it is definitely of a total immersion in water by definition. One only goes for baptism after having been born again (Mark 16:15 &16). The Pope changed the baptismal doctrine to suit Catholicism. A baby, according to the soteriological formula of Romans 10:9, 10, cannot go through the rituals of this spiritual rejuvenation. As babes, Christ did die for them. I am wondering why a priest of Almighty Jehovah will continue to be christening Christian babies Cynthia or Diana, knowing fully well that it is paganistic through and through, being one of the sobriquets of Semiramis.