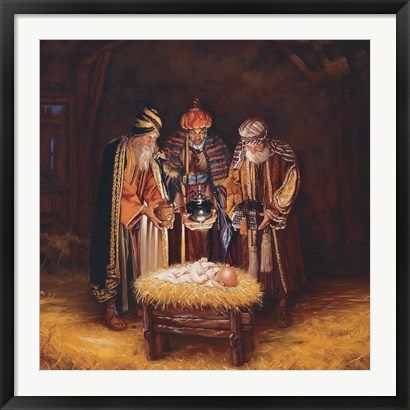 3)            The Christmas story is of heaven reinstating Adam to his dominion role. Power must change hands. And seeing an imminent abscission of the spiritual power (i.e. of spiritism) that protects the global political hegemony of Satanism, Herod became very jittery. An arrangement to surcease God’s intention preoccupied Herod’s demonic stance. God is always steps ahead of His enemies. The wise men who had by then come to the understanding of the incarnation that must precede the practicality of soteriological design had no problem, whatsoever, obeying the instruction of Matthew 2:12 “And being warned of God in a dream that they should not return to Herod, they departed into their own country another way.”

Why did they give the Baby Jesus gifts of gold, and frankincense, and myrrh?

Gold signifies royalty. They asked, in Matthew 2:2, “Where is he that is born King of the Jews?” Prophet Isaiah made a vaticination of, “…and the government shall be upon his shoulder…” To Pilate’s, the governor’s, question of Matthew 27:11, “Art thou the King of the Jews?” the Bible says, “And Jesus said unto him, Thou sayest.” John 18:37, “Pilate therefore said unto him, Art thou a king then? Jesus answered, Thou sayest that I am a king. To this end was I born, and for this cause came I into the world, that I should bear witness unto the truth. Every one that is of the truth heareth my voice.” Of the same Jesus it is written in Revelation 19:16, “And he hath on his vesture and on his thigh a name written, KING OF KINGS, AND LORD OF LORDS.”

AND WITHOUT HIM WAS NOT ANY THING MADE THAT WAS MADE [John 1:3].

The sovereignty of Christ is one and the same as that of the First Member of the Godhead, God the Father. Psalm 22:28, “For the kingdom is the LORD’S: and he is the governor among the nations.” The word ‘nations’ is gowy (go’-ee) (rarely (shortened) goy {go’-ee}) ‘1. a foreign nation 2. (hence) a Gentile 3. (figuratively) a troop of animals, or a flight of locusts.’ Even foreign nations, represented by the wise men will come under the sovereignty of Jesus. “For God is the King of all the earth: sing ye praises with understanding. 8) God reigneth over the heathen: God sitteth upon the throne of his holiness” [Ps 47:7-8]. Who is this in the prophetic utterance of Daniel 7:14 “And there was given him dominion, and glory, and a kingdom, that all people, nations, and languages, should serve him: his dominion is an everlasting dominion, which shall not pass away, and his kingdom that which shall not be destroyed.” It is none other than the One who would destroy the Antichrist. Jesus Christ! Is it not for this reason He came to the world at Christmas?

The annunciation commenced His earthly sojourn

Zechariah 14:9 says, “And the LORD shall be king over all the earth: in that day shall there be one LORD, and his name one.” Revelation 11:15, “And the seventh angel sounded; and there were great voices in heaven, saying, The kingdoms of this world are become the kingdoms of our Lord, and of his Christ; and he shall reign for ever and ever.” Who is the ‘Lord’ in this verse, and who, if I may ask, is the Christ? Can they be One individual? They are the First and the Second Members of the Godhead. The Scripture, through the Divine Logos, revealed Them in this rhema, “I and my Father are one” [John 10:30]. While the definition of ‘are,’ esmen (es-men’) is: ‘we are,’ [indicative of first person plural of eime –exist– is the same as the ‘am’ in Jehovah’s “I AM”]; the noun ‘one’ is heis (heis`) is a neuter gender, meaning, ‘one thing, essence.’ Jesus is of the same essence as the unseen God the Father. The Christmas story is about the Incarnation (of the Most High Jehovah).

The Christmas story is about Jesus, “…ruler in Israel; whose goings forth have been from of old, from everlasting” [Micah 5:2]. ‘From of old’ is the Hebrew qedem (keh’-dem) (or qedmah {kayd’-maw}) ‘1. the front, of place (absolutely, the fore part, relatively the East) or time (antiquity) 2. often used adverbially (before, anciently, eastward);’ and ‘from everlasting’ is `owlam (o-lawm’) (or lolam {o-lawm’}) ‘1. (properly) concealed, i.e. the vanishing point 2. (generally) time out of mind (past or future) 3. (practically) eternity 4. (frequentatively, adverbially, especially with prepositional prefix) always.’ Only God, I believe, can be said to proceed from eternity past.

Get born again to receive the free Spirit of Christmas. Say this prayer of salvation: