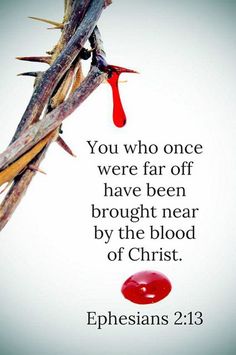 1)            Whether it is in the Hebraic dam (dawm) or the Greek aima (hah’-ee-mah) it means the same thing. It is the seat of life. The circulation of this crimson fluid keeps the life of the living entity alive on terra firma. The scriptural definition is: ‘blood (as that which when shed causes death) of man or an animal; by analogy the juice of the grape.’ Sin contaminated the blood of mankind, making his life unfit to stand before the thrice holy LORD God, the Almighty.

The soteriological formula finds its calculation in the blood. Arbitrariness has no footing in God’s creativity. The order of the Creator’s steps is of a calculating precision. He knew that Adam would drop the ball. His omniscience gave man two lives running on blood. The second life was to enable him to do a 180 degrees volte-face back (of second chance –alien even to celestial angels) to God in total repentance for the benignancy of God’s soteriology.

The New Blood Covenant at the Last Supper

The blood receives its first mentioning here in Genesis 4:10, “And he said, What hast thou done? the voice of thy brother’s blood crieth unto me from the ground.” There is, however, no doubt that a connotation of a bloody affair did take place in these verses, “And the LORD God caused a deep sleep to fall upon Adam, and he slept: and he took one of his ribs, and closed up the flesh instead thereof; 22) And the rib, which the LORD God had taken from man, made he a woman, and brought her unto the man” [Genesis 2:21-22]. This shows a clear indication that God is quite interested in the affairs of humanity. His judgment upon erring intelligent beings of creationism will be tested in Adam.

The head of the angelic beings, Lucifer, sinned once and remained an embodiment of error forever. Ostensibly, the head of the pre-Adamic principalities plunged all of them into the state of disembodied spirits –demons (on demons click this URL https://hoojewale.wordpress.com/2016/04/30/demonism-part-one …). When it came to Adam, the LORD God had to kill two animals, because they had no part in eternity. The animals, albeit soulish, they had not spirits to be regenerated for the Spirit of God’s habitation. Expendable lives, which cannot participate in celestial bliss, were sacrificed as covenantal witness to God’s soteriological intention. What a wise God!

Blood sacrifices point to the ultimate Golgotha death on the cross

Before the shedding of innocent animals’ blood, the innocent drops of Adamic crimson fluid had been received by the witnessing earth. “And the LORD God caused a deep sleep to fall upon Adam, and he slept: and he took one of his ribs, and closed up the flesh instead thereof” [Gen 2:21]. On the indubitable account of blood related soteriology, in the spiritual emancipation of mankind, the bloody affair known of rib extraction must spill Adam’s innocent blood as well. Amen. A certain consanguinity was established when the innocent blood of the sacrificial animal met with the sinless blood of Adam and the rhema of, “Go and sin no more,” was applied to the life of the pristine family. The blood!

This is the first thing Noah did. “And Noah builded an altar unto the LORD; and took of every clean beast, and of every clean fowl, and offered burnt offerings on the altar” [Gen 8:20]. The sacrifice was pleasing to the LORD so much that it is quoted of Him in verse 21, “And the LORD smelled a sweet savour; and the LORD said in his heart, I will not again curse the ground any more for man’s sake; for the imagination of man’s heart is evil from his youth; neither will I again smite any more every thing living, as I have done.”

In the next chapter, a blessing followed the sacrifice in Genesis 9:9, “And I, behold, I establish my covenant with you, and with your seed after you:” –for the perfection of any sacrifice to God necessitates the draining of the blood of the object of oblation. It is the blood that atones for our spiritual derangement. Life for life. God is full of wisdom. “O the depth of the riches both of the wisdom and knowledge of God! how unsearchable are his judgments, and his ways past finding out” [Romans 11:33]! In His judgment of sin, God thundered, “Behold, all souls are mine; as the soul of the father, so also the soul of the son is mine: the soul that sinneth, it shall die” [Ezekiel 18:4]. Since the shed blood has atoned for the sin, thereby removing the curse, the eating of blood revokes divine atonement. Man, through Noah, received the right to make a gourmet of flesh, “But flesh with the life thereof, which is the blood thereof, shall ye not eat” [Gen 9:4]. One life, having been sniffed out for another life to be restored, to make a meal out of the sin stained fluid is quite pollutive.

Be cleansed of your sinful nature. Get born again. Say this prayer, believing it with all your heart: