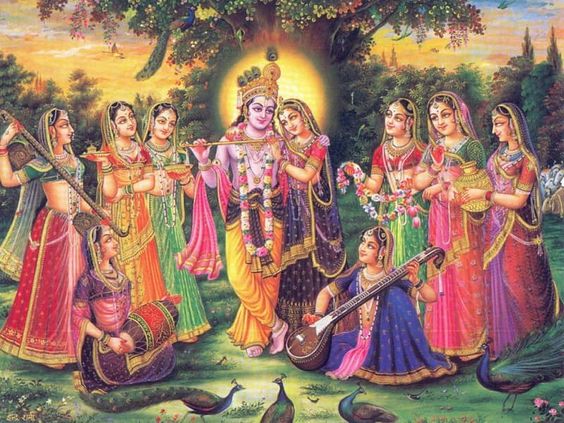 Krishna and his female consorts

These are the other gods of Hinduism and their divine roles:

Ganapati, the Remover of Obstacles

Ganapati, also known as Ganesha, is Shiva’s first son. Lord Ganapati, who has an elephant head, occupies a very special place in the hearts of Hindus because they consider him the Remover of Obstacles. Most Hindu households have a picture or statue of this godhead, and it’s not uncommon to see small replicas of Ganapati hanging from rearview mirrors of cars and trucks!

Rama is one of the most beloved Hindu gods and is the hero of the Hindu epic called the Ramayana.

He is portrayed as an ideal son, brother, husband, and king and as a strict adherent to dharma. Millions of Hindus derive satisfaction from reading and recalling Rama’s trials and tribulations as a young prince who was exiled from his kingdom for 14 years.

Saraswati, the Goddess of Learning

Saraswati is the consort of Brahma the Creator and is worshipped as the goddess of learning, wisdom, speech, and music. Hindus offer prayer to Saraswati before beginning any intellectual pursuit, and Hindu students are encouraged to offer prayers to her during the school/college term and especially before and during examinations.

Durga Devi is a powerful, even frightening goddess who fights fiercely in order to restore dharma

(moral order). Yet, while Durga is terrifying to her adversaries, she is full of compassion and love for her devotees.

I got this from Britannica: In Hinduism, a principal form of the Goddess also known as Devi and also as Shakti. According to legend, Durga was created for the slaying of the buffalo demon Mahisasura, by Brahma, Vishnu, Shiva, and the lesser gods who were otherwise powerless to overcome him. Embodying their collective energy (shakti), she is both derivative from the male divinities and the true source of their inner power. She is also greater than any of them. Born fully grown and beautiful, Durga presents a fierce menacing form to her enemies. She is usually depicted riding a lion and with 8 or 10 arms, each holding the special weapon of one of the gods, who gave them to her for her battle against the buffalo demon. The Durga-puja, held annually in her honour, is one of the great festivals of northeastern India. (Encyclopædia Britannica)

Indra, the King of Heaven and lord of the gods

Indra wields a thunderbolt and is a protector and provider of rain.

Kali, the vicious goddess of Hinduism

Surya (or Soorya) is a golden warrior arriving on a chariot pulled by seven white horses.

Agni holds a special place in Hindu fire ritual to this day as the sacrificer (the priest who performs the ceremony); the sacrifice (the ritual fire and the offerings made into it); and the witness to all rites.

Hanuman is featured in the great Hindu epic the Ramayana. He earned his path to deification by performing feats of strength, devotion, and courage while helping Rama (an avatar of Vishnu) in countless exciting incidents.

Kali: Sanskrit “She Who Is Black” or “She Who is Death” in Hinduism, goddess of time, doomsday, and death, or the black goddess. Kali’s iconography, cult, and mythology commonly associate her with death, sexuality, violence, and, paradoxically in some later traditions, with motherly love. Although depicted in many forms throughout South Asia (and now much of the world), Kali is most often characterized as black or blue, partially or completely naked, with a long lolling tongue, multiple arms, a skirt or girdle of human arms, a necklace of decapitated heads, and a decapitated head in one of her hands. She is often portrayed standing or dancing on her husband, the god Shiva, who lies prostrate beneath her. (Encyclopædia Britannica)

The 24 Elders worship Jehovah in the heavenly assizes

2Corinthians 11:2 reads, “For I am jealous over you with godly jealousy: for I have espoused you to one husband, that I may present you as a chaste virgin to Christ.” If the Hindu Members of its trinity should receive worship, I certainly would not have any problem with it, but for other gods to receive adorational obeisance is quite unacceptable to the Christian Scripture. Exodus 20:4, “Thou shalt not make unto thee any graven image, or any likeness of any thing that is in heaven above, or that is in the earth beneath, or that is in the water under the earth:” negates the display of Hindu gods, making them idols of falsehood. The amative proclivities of these gods even result in biological progenies! Kali is well known for her sanguineous proclivity. That is strictly evil.

A menacing buffalo demon, Mahisasura, troubled the Hindu trinity of Brahma, Vishnu, Shiva, and the lesser gods. All of them, put together, were powerless to overcome him. This is what the religion of Hindu belief recalls. On account of that, Durga, who conquered it, had to be created when Brahman asked the other gods to, “Let us create a conquering goddess.” Jehovah asked in Genesis 18:14, “Is any thing too hard for the LORD?” The adjective ‘hard’ is pala’ (paw-law’) ‘1. (properly, literally or figuratively) perhaps to separate, i.e. distinguish. 2. (by implication) to be great, difficult, wonderful. 3. (causatively) to make great, difficult, wonderful! ’ Matthew 19:26, “with God all things are possible” confirms the Old Testament understanding of Genesis 18:14.

Lakshmi, goddess of wealth and also the consort of Vishnu.

If one Hindu god’s name is known and recognized throughout the world, it is Krishna. Hindus identify Krishna as the teacher of the sacred scripture called the Bhagavad Gita and as the friend and mentor of prince Arjuna in the epic the Mahabharata. For his devotees, Krishna is a delight, full of playful pranks. But most of all, Lord Krishna’s promise to humanity that he will manifest himself and descend to earth whenever dharma declines has sustained Hindu belief in the Supreme Being over thousands of years.

The literal meaning of the word avatar is “descent,” and it’s usually understood to mean divine descent. Avatars are saviour forms of a god that descend to earth to intervene whenever help is needed to restore dharma (moral order) and peace. Two of Vishnu’s ten avatars are Rama and Krishna.

Lakshmi is the goddess of good fortune, wealth, and well-being. As the consort of Vishnu, she plays a role in every incarnation. (She is Sita, wife of Rama; Rukmini, wife of Krishna; and Dharani, wife of Parashu Rama, another avatar of Vishnu.)

Krishna, does it not sound like Christ? Krishna manifests as Vishnu, the Hindu Second Member of the Trinity, just like Jesus. Krishna made an incarnate promise to fellowship with adherents: just like Jesus. He is believed to have reincarnated twelve times and the last time of His incarnation, it was as a twelve years old boy. Everything about him is a duplication of the Christ of the Bible. Hindu must of necessity make the Christo-religious connectivity. But Krishna cannot be our Jesus: for he slept with every woman that came his way, even married women! The Lord Jesus never committed fornication or adultery. Amen! The reason why Jesus would not engage in physical marriage was borne out of the fact that His marriage is a spiritual one: to the redeemed Church.