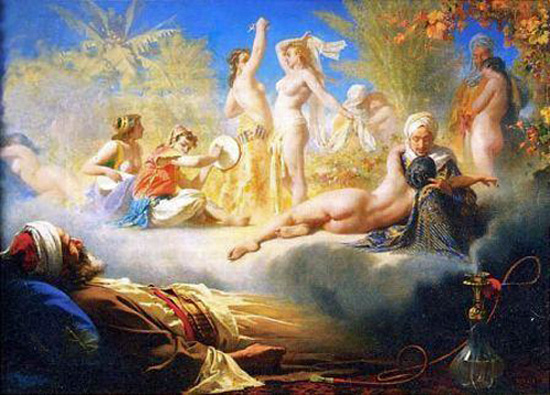 The 9th chapter of the Qur’an is called At-Tawba, and the 20th verse reads: “Those who believe, and suffer exile and strive with might and main, in Allah’s cause, with their goods and their persons, have the highest rank in the sight of Allah: they are the people who will achieve (salvation).”

The Tafsir, the Arabic term for commentary, runs thus: A) Narrated Abu Hurairah [radhi-yAllahu ‘anhu]: The Prophet (ﷺ) said, “Whoever believes in Allah and His Messenger, performs Salat (prayers) and observes Saum (fasts) during the month of Ramadan, then it will be a promise binding upon Allah to admit him to Paradise, no matter whether he fights in Allah’s Cause or remains in the land where he is born.” The people said, “O Allah’s Messenger! Shall we acquaint the people with this good news?” He said, “Paradise has one hundred grades which Allah has reserved for the Mujahidun who fight in His Cause, and the distance between each of two grades is like the distance between the heaven and the earth. So, when, you ask Allah (for something), ask for Al-Firdaus which is the middle and highest part of Paradise.” [The subnarrator added, “I think the Prophet (ﷺ) also said, ‘Above it (i.e. Al-Firdaus) is the Throne of the Most Gracious (i.e. Allah), and from it gush forth the rivers of Paradise].” [Sahih Al-Bukhari, 4/2790 (O.P.48)] E

Face covered, Mohammedan Islamism is synonymous with jihadism, no doubt.

From this commentary, is it not so clear that ‘strive,’ as far as the Mohammedan Qur’an is concerned, is nothing but a sanguinary hostility against anyone whose belief runs contrary to Allah’s word (the Qur’an)? That Jihadists are accorded a celestial heroic welcome is a clear indication that you have to kill a non-Muslim to enjoy the bliss of heaven. The amatory reward of 72 virgin wives is an Islamic promise. What does John 3:3 say? “Jesus answered and said unto him, Verily, verily, I say unto thee, Except a man be born again, he cannot see the kingdom of God.”  The word ‘again’ is the Greek anothen (an’-o-then): ‘1. from above 2. (by analogy) from the first 3. (by implication) anew.’ Anothen comes from the root ano (an’-o): ‘1. upward or on the top.’ This means that the new birth is providential. The Lord went on in His didacticism of “For God so loved the world, that he gave his only begotten Son, that whosoever believeth in him should not perish, but have everlasting life. 17) For God sent not his Son into the world to condemn the world; but that the world through him might be saved” (John 3:16-17). How a man gets born again is found in Romans 10:9-10.

Will the True Creator accord a sinful and vindictive man an annihilative responsibility?

“…get martyred and then come back to life again, and then get martyred” -Muhammad’s       desire.

The prophet of Allah’s one huge wish was to kill as many as his warring arms of jihadism could allow. He would love to be killed in the jihadic cause of Allah’s joy. The Islamic God is called Allah, made of two words: ‘al’ and ‘illah.’ While ‘al’ is ‘the’ definite article, the definition of ‘illah’ is simply ‘god.’ There is definitely nothing special about the term ‘God.’ Anything or anybody, accorded worship, can be god. The name, God, is simply the generic term for any object of veneration. Period.

The sacredness of Islamism –The Kaaba

The words of Jehovah, the God of the Bible, says, “And God said unto Moses, I AM THAT I AM: and he said, Thus shalt thou say unto the children of Israel, I AM hath sent me unto you” (Exodus 3:14). ‘I AM THAT I AM’ is the Hebraic YAHWEH i.e. JEHOVAH. It is found in God’s revelation of Exodus 6:3, “And I appeared unto Abraham, unto Isaac, and unto Jacob, by the name of God Almighty, but by my name JEHOVAH was I not known to them.” The meaning of this name is ‘1. (the) self-Existent or Eternal 2. Jehovah, Jewish national name of God.’ Jehovah God is the One who is, by His own power. No other god’s name is equal to the name of Jehovah! So, I ask, who is this Allah?