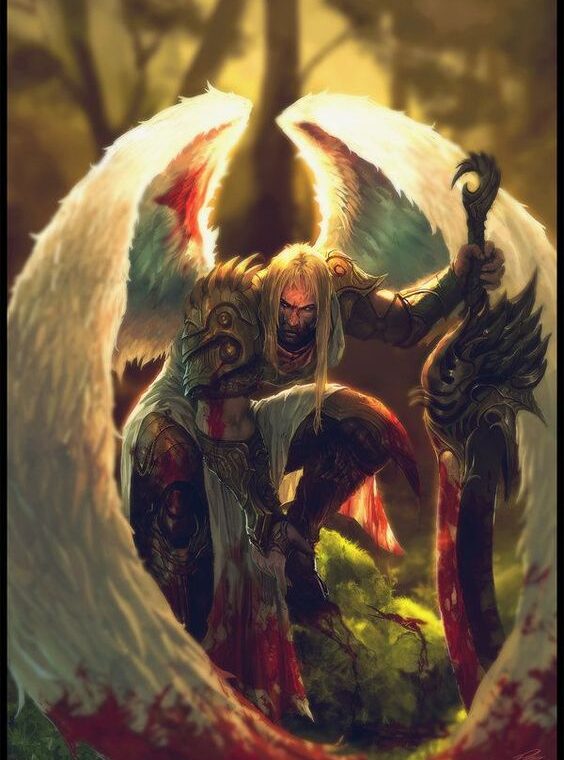 1)            You are a product of creationism, a proof of not having an existentiality of the eternity past, the first of kind –an object of creationism— to stride through the time of creation and to be ushered into the eternity to come in the glory of the Divinity. You forgot, having been blinded by the egregious delusions of arrant stupidity of the absoluteness of fallacious nothingness, that you were and would forever remain an object of creationism. Lucifer, did you not grab a seemingly something, something outside the reality of the will of the Most High? Your prideful cogitation did not allow you to understand that whatever is kept outside God’s view is essentially non-existent. What you had in your delusional grasp was the theft of an absolutely uselessness of nothingness –the vanity of impossibility was the hope of your plunder!

The beauteous splendour of your glory went into your head, and stupidly forgot, quite unlike your Maker, who ever forgets not, that your being is a matter of historical documentation, far by the farthest of imagination lower than the co-Creatorship Divine Members of the Trinity. Isaiah 14:12-13, “How art thou fallen from heaven, O Lucifer, son of the morning! how art thou cut down to the ground, which didst weaken the nations! 13) For thou hast said in thine heart, I will ascend into heaven, I will exalt my throne above the stars of God: I will sit also upon the mount of the congregation, in the sides of the north:” This is the scriptural proof of Lucifer’s narcissism.

As the son of the morning, Lucifer, you are not the Day Star –JESUS.

Should you not have remained the first glorious intelligent being of creation and remain a phenomenal angel of greatness? How could you please yourself with vain glory? It is truly an uncomfortable fascination, dwelling on the reason for your celestial disobedience. How could you not be satisfied with being the number one intelligent being of creationism? Lucifer, you made your heinous, criminal choice. To think that your rule of Satanism lasts only a very short time makes you the biggest fool before the thrice holy God. Amen.

John’s account of Satan’s spiritual demise in Revelation 12:12, “Therefore rejoice, ye heavens, and ye that dwell in them. Woe to the inhabiters of the earth and of the sea! for the devil is come down unto you, having great wrath, because he knoweth that he hath but a short time;” shows how short is the devil’s time. From the creation of Adam the male and female, going by Peterine “one day is with the Lord as a thousand years, and a thousand years as one day” of 2Peter 3:8, the six thousand years of our present earth is not even up to the celestial one week. When you eventually receive the world’s worship with the Antichrist as your regent it will last for only forty-two months!

Isaiah 14:14-15 “I will ascend above the heights of the clouds; I will be like the most High. 15) Yet thou shalt be brought down to hell, to the sides of the pit.” And to think that a transient three and a half years of godhood –against the will of Jehovah— happens to be the desideration of your beastly salivation tells me the incorrigibility of the warped mentality of the abject dementia ruling your dark heart. You staged the first ever putsch. Retributively, incorrigible dementia staged another putsch in your dark heart. Shame!

Lucifer, you fell from the glorious Light into despicable darkness.

Should you not have told yourself not to allow the evil thoughts of your dangerous, mental tread? Foolishly, you thought you could manage irresponsibility. Your responsibility is to your Creator, the Divine Christ. You did not create yourself and neither can you recreate, positively, an existing object of creationism. You should have gone to the Creator in lowliness of a heart, needing divine intervention, involve the Christ in this foreign falsehood, alien to the I AM THAT I AM. You should have told the story of your reckless wont. Ask the One who brought you, you that were not, before your making, of this nagging problem, telling Him to help you banish the alien foolishness. If you had done that, you would have gone through your probation, testifying of the goodness of the LORD God, and, leading in the salvific song of angelic restoration. Just imagine if by your needful gesture other angels had followed suit, what glorious diadem you would have adorned your head to the glory of Him, which is, and which was, and which is to come. Amen.