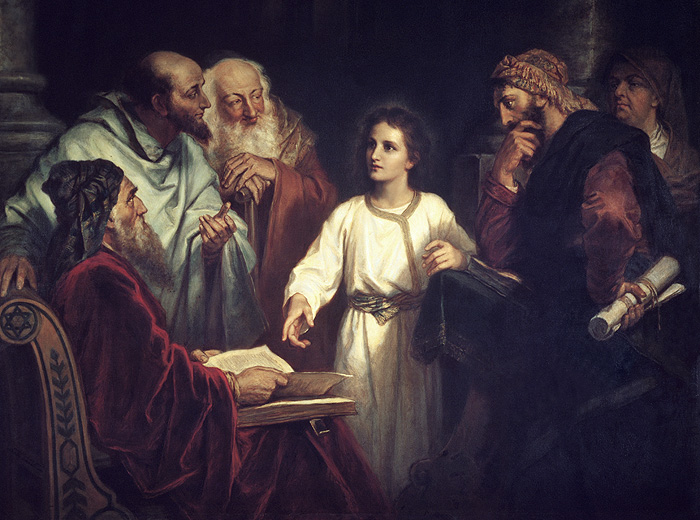 Jesus at age twelve, in the Jerusalem Temple

1)            Was His Bethlehem procreation His very first time of treading upon the terra firma of Adamic reality? Had He an existence before His birth into the tribe of Judah? Erroneously, Jehovah’s Witnesses sect of Charles Taze Russell’s founding teaches that Christ was the first angelic intelligence of creationism in the person of archangel Michael, quoting 1Thessalonians 4:16 “For the Lord himself shall descend from heaven with a shout, with the voice of the archangel, and with the trump of God: and the dead in Christ shall rise first.” Mohammedan Islamism sees Jesus as one of the myriad holders of the vaticinatory office of Allah. Cerintus, as the mouthpiece of gnostic Docetism, in the days of the Apostles, spread the Satanism of Christ as being just a mere consciousness; the intangibility of which just comes upon whomever it chooses as its receptacle, and goes away after an achieved purpose –e. g. it left Jesus when He died.

The protocol of the LORD God, the Bible, disagrees with these errors. So, how is it possible for an earthly being to experience an existentiality before an earthly life of 33 ½ years? It is quite simple!

Johannine New Testamentary divine inspired of the above has the word ‘beginning’ arche (ar-chee’) meaning: ‘1. (properly abstract) a commencement. 2. (concretely) chief (in various applications of order, time, place, or rank); origin.’ Two entities of Divinity have a mention here. They have an existence before creationism, from this biblical documentation. In order of time, place or rank the ‘Word’ of God stands in absolute supremacy. The next word ‘was’, can be en (een’), esan (ee’-san), ete (ee’-te), emen (ee’-men), es (ees’), or estha (ees’-tha) I (thou, etc.) was (wast or were).’ What makes this ‘was’ interestingly worthy of note is its grammatical structure. It is an imperfect tense of eime (be or am), ‘AM’ part of God’s name -I AM.

‘Word’, logos (lo’-ğos), is: ‘1. a word, something said (including the thought). 2. (by implication) a saying or expression. 3. (by extension) a discourse (on a topic). 4. (informally) a conversation (on a topic). 5. (thus) a matter. 6. (also) a reasoning (of the mental faculty). 7. (hence) a reason (i.e. a motive).’ Zoe (zō-ee’) is the Greek for ‘life’: ‘1. life† (more than merely the present physical or natural life). 2. life-above (above or elevated in relation to the mere physical condition. There may be strong connotations and direct inferences to Spiritual, Kingdom, or Eternal life in certain contexts, but not always. This word deserves special demarcation and attention). 3. epithet of Jesus (John 14:6), the source of life (Col 1:16-17), both of the natural existence and above this mere bodily existence. 4. (Note) The act of genuine, neighborly kindness is an example of living above the mere bodily, flesh-driven existence.  In a lower sense, watching the beauty of a sunset with someone and waiting as the stars appear is also an example.’ What is ‘light’? It is phos (fōs’): ‘luminousness.’

The Johannine revelation used an imperfect tense ‘was’, classifying the existence of the Logos as an eternal one in the past –that came to no ceasing— that is, before creationism. His existence never came to an end from eternity past even through the creationism. The eternal life essence of Jesus shared zoe with God the Father. Simply put, zoe means ‘God’s kind of life.’ Now, as the Logos, Christ is: ‘the totality of God’s mind, will and thought.’ How can any entity be thus and exist in the classification of an object of creationism? Verse three in its unequivocalness, categorically says “all things were made by him.” If it says, “and without him was not anything made that was made,” does the spirit of limpidity not pour forth the revelatory facticity that nothing, absolutely, did create this enigmatic Personage, Jesus Christ? Can anyone be a life giver and not be God, the blessed Author of creationism? “And the life was the light of men” must of Scriptural necessity take us back to Genesis.

Next Post
IS THE MARIAN BIRTH THE FIRST EXISTENCE OF JESUS CHRIST? (Part two)