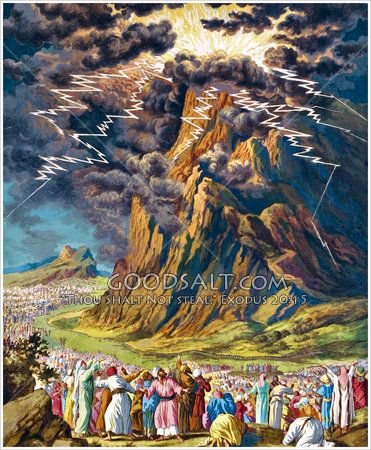 Israel learnt obedience from the holy mouth of God.

4)            Exodus 19:5 “Now therefore, if ye will obey my voice indeed, and keep my covenant, then ye shall be a peculiar treasure unto me above all people: for all the earth is mine:” is the divine charge to Israel. No nation boasts of this ‘peculiarity of treasure’. The Hebrew for ‘peculiarity of treasure’ is cgullah (seg-ool-law’) meaning: ‘wealth (as closely shut up).’ The nation of Israel up till now and till the second coming of Jesus Christ, remains untouchable. Israel produced the Saviour of the world. Israel of Shem was the first to propagate the soteriology. It is suicidal to reject God’s instruction. Jehovah is not just another object of veneration; HE owns the entire heaven and the earth. He alone is the Almighty.

Exodus 23:21 “Beware of him, and obey his voice, provoke him not; for he will not pardon your transgressions: for my name is in him.” Is this One to beware of not the Second Member of the Godhead? His (God’s) name is in Him because this is none other than EMMANUEL – God is with us a.k.a. Jesus Christ. When Moses struck the rock instead of speaking to it, Paul made us to understand that Jesus – in His pre-incarnation manifestation – stood on that rock. The name JESUS, the Hebraic Yehoshua means ‘Jehovah is Saviour’, authenticating God’s prophetic name in Him. The chicanery of Islam teaches that Exodus 23:21 is in prophetic reference to Muhammad. For his irreverent act, Moses did not set his leadership foot on the Promised Land. Disobedience is evil.

1Samuel 15:19 “Wherefore then didst thou not obey the voice of the LORD, but didst fly upon the spoil, and didst evil in the sight of the LORD?” King Saul brought into the land of Israel those things he was told to annihilate. He spared the life of an evil king ‘Agag (ag-ag’) whose name means: ‘1. flame.’ This Amalekitish king, like other ones, constitutes disturbing consuming fire of destruction to the children of Israel spiritually. Greed and ill-affection towards the very well-fed rams and the handsome visage of Agag blinded Saul’s loyalty to God. King Saul lost his rulership of God’s own people.

Proverbs 15:32 “He that refuseth instruction despiseth his own soul: but he that heareth reproof getteth understanding.” Man may be a free moral agent, but the hard truth that calls for digestion is the fact that God still gave the first couple some dos and do nots; to prove that God must be put into serious consideration. They were free to eat from all the surrounding trees save the one called the tree of knowledge of good and evil. They would not live to complete a thousandth year or another one thousand years of existence if they should come into disobedience. Death was God’s promise for disobedience. ‘Refuseth’ is the Hebraic para` (paw-rah’) and means ‘1. to loosen. 2. (by implication) to expose, dismiss. 3. (figuratively) to absolve, begin.’

This word, para` , teaches that the ‘refusal’ of God’s word is indicative of giving oneself too much freedom; in fact, it gives a picture of one leering at the Creator. Definition two says that a disobedient person, having got himself exposed to Satanism, finds it sporty dismissing the LORD’s instruction. The receipt of Lucifer’s didacticism, based on Satanism, gives a person every stance of excuse, thereby absolving one of disobedient act; and lo and behold, he has begun a new life of belligerence against the will of God. The next word, ‘instruction,’ is muwcar (moo-sawr’) it means ‘1. (properly) chastisement. 2. (figuratively) reproof, warning or instruction. 3. (also) restraint.’ That God has always warned His intelligent creation cannot be debunked. The disobedient soul, ergo, is on a suicidal mission, because ‘despiseth’ is ma’ac (maw-as’) in Hebrew and it means ‘1. to spurn. 2. (intransitively) to disappear.

The lives of those who would dare refuse to get born again, which the Holy Spirit is doing everything possible, through Christianity in the propagation of eternal life in Jesus, will find themselves disappearing before the presence of the thrice holy God; hell is the eternal abode. It may sound like a Hollywood script, but it is not. It is the gospel truth. ‘Getteth’ is qanah (kaw-naw’): ‘1. to erect, i.e. create. 2. (by extension) to procure.’ 3. (especially) to purchase. 4. (causatively) to sell. 5. (by implication) to own.’ What is ‘understanding’ of this verse? It is leb (laɓe): 1. the heart. 2. (figuratively, very widely) the feelings, the will, and even the intellect. 3. (likewise) the center of anything.’ To the obedient people of God, the reality of their being bestows on them a representative capacity of God’s righteous perpendicularity. They stand erect in spiritual adoration of the Most High. They have allowed a creation of divine affinity in their lives. The heart of an obedient person freely wills to do God’s bidding, love Him and seek none but the LORD God.