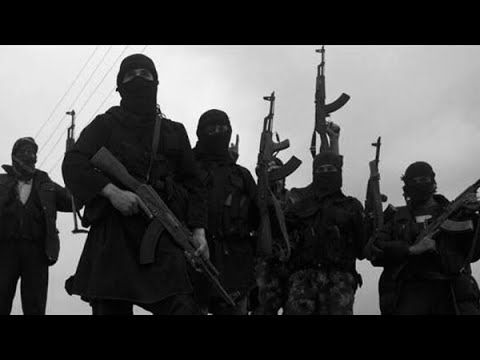 JIHADISM MUST CONTINUE TO THRIVE (8)

JIHADISM MUST CONTINUE TO THRIVE

8)            It should not be surprising to be witnessing jihadic upsurge in Nigeria. Muhammad, the prophet of Allah, is believed to have personally led about sixty jihad onslaughts, in his lifetime, on lands of people who did not believe in Islam. The truth of my claim is not specious; it is backed by this hadith: Sahih al-Bukhari, Call to Prayers (Adhaan); Book 10, Hadith 8. Narrated ‘Humaid: Anas bin Malik said, “Whenever the Prophet (pbuh) went out with us to fight (in Allah’s cause) against any nation, he never allowed us to attack till morning and he would wait and see: if he heard Adhan he would postpone the attack and if he did not hear Adhan he would attack them.” Anas added, “We reached Khaibar at night and in the morning when he did not hear the Adhan for the prayer, he (the Prophet) rode and I rode behind Abi Talha and my foot was touching that of the Prophet. The inhabitants of Khaibar came out with their baskets and spades and when they saw the Prophet (pbuh) they shouted ‘Muhammad! By Allah, Muhammad and his army.’ When Allah’s Messenger (pbuh) saw them, he said, “Allahu-Akbar! Allahu-Akbar! Khaibar is ruined. Whenever we approach a (hostile) nation (to fight), then evil will be the morning of those who have been warned.

The Bible does not support evangelism of coercion.

How many times did King David attack any nation simply because they would not observe the Sabbath day or make the daily sacrifices which the LORD their God instructed them to perform? Not even once did any Jewish leader embark on this kind of carnage. The disciples of Jesus asked Him to do what Muhammad would had loved so much in the Book of Luke 9:54-56 “And when his disciples James and John saw this, they said, Lord, wilt thou that we command fire to come down from heaven, and consume them, even as Elias did? 55) But he turned, and rebuked them, and said, Ye know not what manner of spirit ye are of. 56) For the Son of man is not come to destroy men’s lives, but to save them. And they went to another village.” Jesus is a peace loving Christ. Even after His resurrection, when all power in heaven and on earth was in the custody of Jesus, the accounts of Acts 8:3-8 did not make the disciples go to a jihadic war. “As for Saul, he made havock of the church, entering into every house, and haling men and women committed them to prison. 4) Therefore they that were scattered abroad went every where preaching the word. 5) Then Philip went down to the city of Samaria, and preached Christ unto them. 6) And the people with one accord gave heed unto those things which Philip spake, hearing and seeing the miracles which he did. 7) For unclean spirits, crying with loud voice, came out of many that were possessed with them: and many taken with palsies, and that were lame, were healed. 8) And there was great joy in that city.”

The God of Christianity fought for His missionary work. He sent down His angelic help.

In the biblical Acts Of The Apostles 5:17-32, verses 17 to 23 reads, “Then the high priest rose up, and all they that were with him, (which is the sect of the Sadducees,) and were filled with indignation, 18) And laid their hands on the apostles, and put them in the common prison. 19) But the angel of the Lord by night opened the prison doors, and brought them forth, and said, 20) Go, stand and speak in the temple to the people all the words of this life. 21) And when they heard that, they entered into the temple early in the morning, and taught. But the high priest came, and they that were with him, and called the council together, and all the senate of the children of Israel, and sent to the prison to have them brought. 22) But when the officers came, and found them not in the prison, they returned, and told, 23) Saying, The prison truly found we shut with all safety, and the keepers standing without before the doors: but when we had opened, we found no man within.” Who freed the imprisoned disciples? The angel of the LORD God; I wonder why this was not replicated, centuries later, in the Muhammadan missionary days. Who is this Allah, quite different from Jehovah?

An angel freeing Peter and John from jail

They were asked to be brought in Acts 5:26-32 “Then went the captain with the officers, and brought them without violence: for they feared the people, lest they should have been stoned. 27) And when they had brought them, they set them before the council: and the high priest asked them, 28) Saying, Did not we straitly command you that ye should not teach in this name? and, behold, ye have filled Jerusalem with your doctrine, and intend to bring this man’s blood upon us. 29) Then Peter and the other apostles answered and said, We ought to obey God rather than men. 30) The God of our fathers raised up Jesus, whom ye slew and hanged on a tree. 31) Him hath God exalted with his right hand to be a Prince and a Saviour, for to give repentance to Israel, and forgiveness of sins. 32) And we are his witnesses of these things; and so is also the Holy Ghost, whom God hath given to them that obey him.”

With the omnipotent power of the Holy Spirit, the disciples should maim the religious authorities, but they followed the path of peace, unlike what Islamism would unleash on the world.