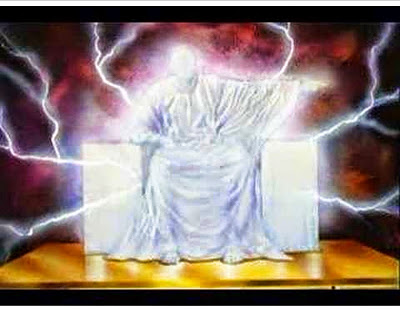 The difference between the One on the throne and the heavenly creatures is the obeisant worship HE receives as Jehovah, the Deity. Lucifer’s subtle attempt at celestial deification was evidently scurrilous. Woeful failure to a fiendish foe it was.

To the earth, at a time when Adam had not been created, he and his putsch collaborating fallen angels were cast. Part of Isaiah 45:18 says, “…God himself that formed the earth and made it; he hath established it, he created it not in vain, he formed it to be inhabited”. The phrase ‘in vain’ tohu (to’-hoo) meaning: ‘to lie waste; a desolation (of surface), that is, desert; figuratively a worthless thing’, and the word, ‘inhabited’ is yashab (yaw-shab’) ‘to dwell, remain, sit, abide’. “And the earth was without form, and void…” is the report of Genesis 1:2, where ‘without form’ is the same Hebrew tohu. The auxiliary ‘was’, hayah (haw-yaw): ‘to be, become, come to pass, exist’, proves that the right word should be ‘became’ and that the auxiliary ‘was’ ought not to be employed by the translators, and that the account of Genesis 1:2 was not the original situation of creationism. Beings who were inhabiting the earth are the ones Paul mentions in Ephesians 6:12, “For we wrestle not against flesh and blood, but against principalities, against powers, against the rulers of the darkness of this world, against spiritual wickedness in high places”. The Principalities, Powers, Rulers of the Darkness of this World and Spiritual Wickedness were the four prominent group of leaders of that earthly era.

Lucifer used his subtlety to infiltrate the psyche of those beings and they pitched their spiritual camp with the adorable fallen arch angel. They became, as God’s punishment, disembodied spirits, having sold their God ordained leadership to Satan, the Devil. Demonism was birthed. You will find more exposition on the origin of demons when you read my post “DEMONISM”. What is observed in Genesis 1:3 is creation all over again and this is the reason why I do find it apropos to term it recreationism.

Adam and his wife were enjoying a most pleasant Eden. The old dragon dared not approach Adam the man, in whose custody is both the oracle of Jehovah and the dominion of the entire earth. At that material time Adam owned the earth, power of authority had changed by the reason of the recreationism! The dragon is a coveting – power hungry – sinner. He had studied the couple very well, having burnt the proverbial midnight candle in a serious homework. Adam was robbed of his leadership. Cain reestablished the rapport with the serpent from which his parents had backpedalled, thereby creating an Adamic dichotomy of saints and miscreants of the antediluvian.

An unprecedented freakish species of half human, half angel is presented to us in Genesis 6:4, “There were giants in the earth in those days; and also after that, when the sons of God came in unto the daughters of men, and they bare children to them, the same became mighty men which were of old, men of renown”. Nephıyl or nephil (nef-eel’) is the Hebrew word for ‘giant’, meaning: ‘a feller, that is, a bully or tyrant’. Satan infiltrated the earth with domineering freaks who took over the government, economy, sporting and social activities of the earth. This incursive stance a la nephil was designed to populate the earth with polluted beings: a spiritually irreconcilable ones who would have made it impossible for Christ to die for a world of spiritual freaks.

Only eight souls, all of Noah’s household, survived the diluvial annihilation.

Oh, that Noah would just have mastered his paroxysm and would have forgiven the error of his fun poking children! Noah parted his lips and what poured forth? Anathema: first, to the detriment of a new beginning of the mankind that he led out of the great deluge, and second, to the official enthronement of the leadership of the evil-turned Lucifer, the first to be cursed. Noah’s curses had abetted Ham’s i.e. the African states’ backwardness and the spiritual tepidity of Japheth i.e. Europe. Lucifer made sure that the anathematized stock of Ham, called Nimrod, a hunter of human heads, lorded and headed the first constituted human government!                                (…to be continued…)