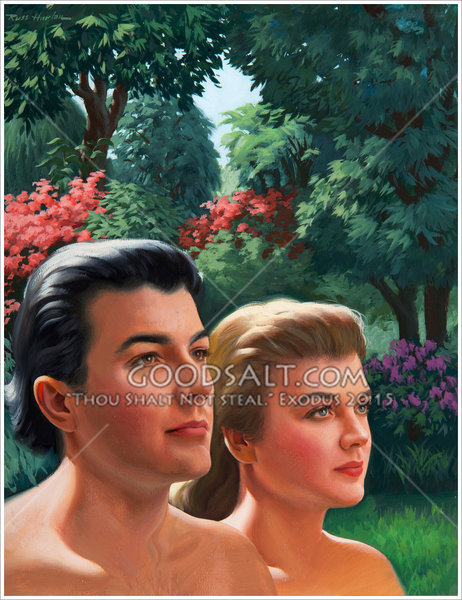 (2)           Adam named her ‘woman’ ‘ishshâh or nâshı̂ym (ish-shaw’) which in the Hebrew means: ‘woman, wife, female; woman (opposite of man); wife (woman married to a man).’ It was of utmost prerequisite that he should name her. It was a fundamental prerequisite to actuate his ownership of an intelligent being before the inevitable usurpation of the enemy eventually did. Jesus -in Adam- must do it first. In naming her the existence of the church was engendered in an adumbration of “….I will build my church; and the gates of hell shall not prevail against it” [Matthew 16:18]. Lucifer did everything to destroy this very important phenomenal event in man’s existence. Because in Adam Jesus succeeded, having tested the waters in Eden, it was time for Him to declare for all eternity, “and the gates of hell shall not prevail against it.”

Two important reasons the Devil chose to usurp the dominion of the earth via the woman was that since it was to the man that the oracle of the Divinity was given, he knew what a disastrous oddity it would be facing Adam the man. Even the evil Lucifer hated to lose in his nefarious enterprise! How I wish man would learn not to lose to the glory of Jesus. He chose the woman for the huge price of capturing the Church. Satan was of a deep savvy that the church and worship are quite the same. “Get the emblem of the Church,” he soliloquised, “and you’ve got the deified worship of your esurient crave. And the beguiled woman came under the guilty hands of a faux pas when she vomited the infamous “neither shall ye touch lest ye die” because it is absolutely unscriptural. She was guilty. The judgment is death!

The innocent blood of Adam had gone forth and into the earth of sinful confinement. The same blood that went into her creation had, by the design of the Divinity, been made an atoning availability. To Lucifer’s chagrin the sinful duo did not die. Hallelujah! To reclaim the lost glory, Adam knew he had to name her again. Eve, which is Chavvah (khav-vaw’) in Hebrew means: ‘1. life-giver 2. Chavvah (or Eve), the first woman.’ “O the depth of the riches both of the wisdom and knowledge of God! how unsearchable are his judgments, and his ways past finding out!” (Roman 11:33). Two is the scriptural number of testimony and of witness, ergo, twice named testified that God is the true Lord of this matrimony.

Adam renamed the woman to ensure the continuity of the marriage. It must take after God’s vision of: once married, is eternally married: where divorce is a spiritual illogicality which has no locus standi in the heavenly assizes. A proof of the fact that a member of the Church is eternally born again. “…..I will build my church; and the gates of hell shall not prevail against it” [Matthew 16:18].

God had put all necessary ingredients of marital success into the crafting of Adam. He was God’s disseminator of the oracular afflatus. God cannot lose. He must have His own desire. Jesus, therefore, got back His bride in Eve, the mother of the living. After the temptation, Adam’s wife was able to distinguish between faithfulness of the LORD God and the shenanigan device of the Devil, having been fed with his beguilement. She had learnt her lessons. Eve made her wise choice.

The tempter asked her to come with him to rule the world. She would not fall for another cozenage. “I’ll make you the goddess of the entire globe,” was the next line of diabolism. Just imagine if Eve had embraced this fantastic offer of the supreme goddess of the entire world. Satan would have made use of the matrix of prototype of humanity. It would have been the biggest deal of satanic worship. Her first demonic son would be anointed as the supreme prince. “Quite impressive,” she admitted; but the Spirit of God showed her her future with Adam and Eve saw a much bigger picture! Amen!!

Eve stuck with Adam for a good reason

She would rather get stuck with a poor Adam than cringe slavishly before Lucifer and all the huge opulence at his disposal. God showered her with mercy. She remembered that. She had had reinstatement bestowed on her. “This is a good God,” Eve had admitted to herself. “Quite unlike this deceiver;” so she decided to actuate the dream of the LORD God by sticking very closely to her husband. Eve saw the light. She saw the big picture.

Blood sacrifice: an adumbration of the ultimate sacrifice of the Lamb of God.

In Adam’s sleep she saw the death of Jesus. The blood from his side foretold the Lord’s propitiation of atonement. Atonement, to her, read something different: at-one-ment! She will be one with the LORD God forever when the archetypical Jesus, whom her husband adumbrates, comes. The celestial bliss will wipe away all the tears of demonic afflictions. Her tectonic walk with the LORD is the walk of every Christian. Only with Adam will this walk receive rejuvenation in Christ. Eve stuck wisely to Adam.

Semiramis giving suck to Tamuuz, the son of Nimrod or Baal.

It pays to be part of the big picture. Satan mesmerised Nimrod and his wife, Semiramis, who refused to look at the final analysis. They did his bidding; and the foolish couple remains the most idolized across the entire globe. Nimrod is the sun god and Semiramis, the moon goddess. Their foolishness stems from the fact of Psalm 14:1, “The fool hath said in his heart, There is no God. They are corrupt, they have done abominable works, there is none that doeth good.” A dichotomy of the adoration of entities had been engendered by satanical diabolism.

She stuck with her husband, Adam, to bring God’s dream to fructification.

Praise be to Jehovah who did not allow Eve to fall thereby giving someone like me an opportunity to serve the LORD God, in the name of Jesus. Amen!  (Concluded)

Next Post
SATAN FELL BEFORE THE ETERNAL GOD (I)