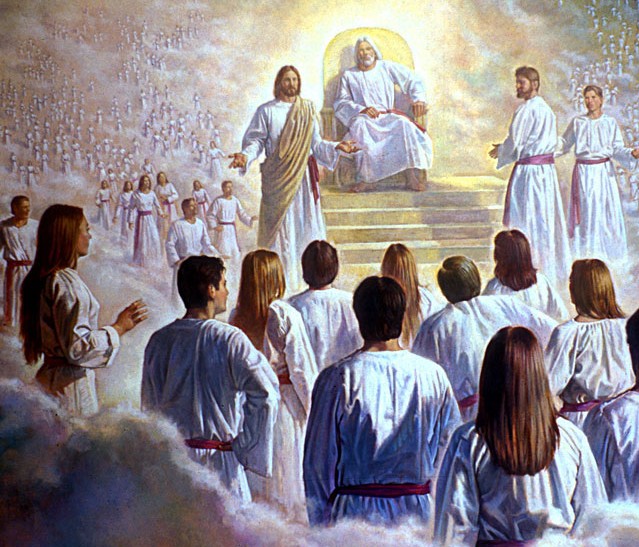 SATAN FELL BEFORE THE ETERNAL GOD (I)

*1*         Jehovah is a God of legality. He sits on the celestial throne as the Judge and King of the heavenly assizes. His adjudicatory essence receives a proof in Genesis 15:14, where He foretold what would befall Abraham’s progeny. “And also that nation, whom they shall serve, will I judge: and afterward shall they come out with great substance.” The word ‘judge’ is dı̂yn or dûn (deen) ‘to judge, contend, plead.’ Abraham, when he saw HIS day, took the opportunity to haggle the salvation of the population of Sodom and Gomorrah in Genesis 18:25, “That be far from thee to do after this manner, to slay the righteous with the wicked: and that the righteous should be as the wicked, that be far from thee: Shall not the Judge of all the earth do right?” Shâphaṭ (shaw-fat’) is the Hebrew word for ‘Judge,’ meaning: ‘to judge, govern, vindicate, punish.’ The LORD lounges on a throne and that accounts for HIS Majestic office. One of the innumerous celestial ministering subjects was Lucifer.

The ‘light bearer’ is not The LIGHT!

His proximity to the Creator, as the ‘light bearer’ (which is the definition of his name, Lucifer) and a highly intelligent being, leaves him no excuse to feign benightedness of what was expected of him and the consequences of any disobedience. Ezekiel 28:15, “Thou wast perfect in thy ways from the day that thou wast created, till iniquity was found in thee.” ‘Perfect,’ from this verse is tâmı̂ym (taw-meem’): ‘complete, whole, entire, sound.’ ‘Ways’ is derek (deh’-rek): ‘a road (as trodden); figuratively a course of life or mode of action, often adverbially.’ The word ‘day’ is: yôm (yome) ‘day (which speaks of the hotness of the working period of sunshine), time, year.’ The next word is ‘created’ bârâ’ (baw-raw’): (absolutely) to create; (qualified) to cut down (a wood), select, feed (as formative processes).’And ‘iniquity’‛evel ‛âvel ‛avlâh ‛ôlâh ‛ôlâh (eh’-vel) (moral) evil, injustice, unrighteousness, wrong;’ proves that Lucifer did bring a decadent change upon himself, which caused his prideful fall.

Judged: the god of this world.

The Hebrew bârâ’ in contrast to ‛âśâh (aw-saw’) speaks of creation out of none existing material. The LORD probably used a non-existing materials to create Lucifer: for HE chose to make him first before any other intelligent being. His being at creationism apotheosized the lifestyle of angelic ones. Leading himself into an apostate abomination, he thought the apotheosis he enjoyed was a culmination into deification.

He cometh to steal, kill and to destroy.

God set him in the quintessential way he found his glorious self, in one of HIS working days. Lucifer also looked for a day to perfect a treasonous felony. It led to the infamy of Isaiah 14:13-14 “For thou hast said in thine heart, I will ascend into heaven, I will exalt my throne above the stars of God: I will sit also upon the mount of the congregation, in the sides of the north: 14) I will ascend above the heights of the clouds; I will be like the most High.” These pronouncements were vociferations of maniacal proclivities that were carried by Satanism of demency, for a procacious transmission to the sacred presence of the celestial throne room of the Majesty.

Jehovah is eternal. When Lucifer’s errancy goaded him to the execution of the first putsch, it was before the Eternal Judge, the LORD God, that he committed the felonious cruelty. Christ and the Holy Spirit were not the only Eternal Witnesses to the satanic antipathy, myriads of the two-thirds counterinsurgent angels, led by Michael are witnesses to Lucifer’s criminality in the court of celestial jurisprudence. In fact Lucifer himself will stand to depose his nefariousness. An eternal judgment is due, ergo, to a sinfulness before the Eternal Jehovah. Lucifer, I believe, knew what he was into. He tried to play a psychological game with God.

Be wise. Get Jesus involved in your life. Get born again. In all sincerity say this prayer of salvation: “Dear heavenly Father, I come to You now in the name of Jesus Christ. I believe in my heart that Jesus is the Son of God. I believe that Jesus died on the cross for my sin. I believe that You raised Him from the dead. I confess with my mouth that Jesus is Lord and I receive Him now as my Lord and my Saviour. I give God all the glory. Amen!”       (…to be concluded…)

Next Post
SATAN FELL BEFORE THE ETERNAL GOD (II)