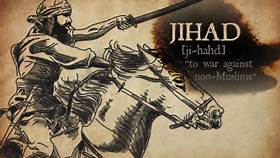 RELIGION OF THE ANTICHRIST (two)

ARE THEY LAUGHING AT BAPHOMET? I GUESS NOT! THEY KNOW WHAT THEY’RE DOING!

It was absolutely impracticable for Lucifer to practice another form of worship on earth, even with the willing foulness of demonic billions. The prevailing divine order makes Adam the dominant owner of the terra firma. Satan’s religious coup d’état in the world of the righteous Adam, in his –extant– sinless state, would have suffered the fate of a still born venture. All Adam needed to do would just have been, “Who are you? What are you doing? Disappear from my domain!”

Lucifer knew that he would not dare to disregard Adam’s command. Adam, in the stead of Christ, had dominion of the globe. Lucifer could have chosen a place, farther away from Eden (come to think of it), to hoist his wicked, religious aberration. The evil one must have to wrestle authorisation from Adam’s anointed dominion. For two reasons he must approach the woman through subtlety to usurp Adam’s dominion. There was absolutely nothing Satan could do to change this spiritual reality. Adam was the sole oracle of the entire earth. It was the fiat of the Divinity.

The woman of Eden had not the oracle. This same woman, however, is emblematic of the Church, the worshippers, body of Christ. Satan, most definitely, knew what he was doing. In his masquerading ophidism, Lucifer also knew two other things why he must attack Adam via his wife. The Hebrew word for wife, iysh, speaks of a one who surrounds, protectively. The other second reason being that the woman is not the one who is in custody of God’s oracle, the man, Adam,does. He wiled the credulous naivety of Adam’s wife to pronounce a scriptural anomaly. The moment she vocalised the mesmeric projection, “…neither shall ye touch it, lest ye die” of Genesis 3:3, the Devil knew he had got himself a strong foothold on terra firma. The Devil wasted no time in feeding her incaution with the last apostatising morsel of verse four: “And the serpent said unto the woman, Ye shall not surely die:” in a clear negation of the oracular, “But of the tree of the knowledge of good and evil, thou shalt not eat of it: for in the day that thou eatest thereof thou shalt surely die” [Genesis 2:17]. All that Satan needed to do is just to add a seemingly inconsequentially innocuous ‘not’ to God’s “thou shalt surely die”.Subtlety!

The woman, no doubt, expressed faith in what she believed she knew. The attendant faith is based on the ideological didacticism of Satanism, and not on the solid ground of Christ. Her ill expended faith supported the words of God’s enemy. The serpentine mission was a critical attempt to scoring a legal point of spiritualism. The woman’s superstitious remark simply veered her off the oracle of the LORD God. Unbeknown to Adam’s wife, her seemingly innocuous reply had laid the foundational stone for religious edifices of Satanism. Every religious wheel accelerates from superstitious beliefs. Words spoken in direct opposition to HIS constituted Logos is an affront to God’s eternal intelligence. It is a procacious challenge to HIS authority when one speaks even a seemingly inconsequential tittle contrary to the express Word of the Almighty.

It was a huge masterstroke for Lucifer to goad the woman, emblematic of the body of worshipping congregation, in making a speech that offers a legalistic feet for the fatuity of Satan’s religious establishment. Sadly enough, Adam, the male, stupidity acquiesced. They did receive divine pardon, though, thanks to Jesus (it was part of God’s plan to trap and bring Lucifer, who has no second chance, to judgment for his misuse of his free moral agency). Adam’s transition into this risk, lamentably, did engender an aphonic proclivity in his characterisation, for the rest of his recorded, scriptural life.

In this unfortunate, spiritually irrecoverable, child Lucifer found an ambassadorial priesthood of the antediluvian age. That which his compunctious parents denounced he, so pig-headedly, embraced. Satan’s tree of evil had begun to bear fruits. The first Antichrist had emerged.

In the Book of Genesis 4:9, we see the first ever Adamic contumacy: “And the LORD said unto Cain, Where is Abel thy brother? And he said, I know not: Am I my brother’s keeper?” The name ‘LORD’ is the Hebrew yehôvâh (yeh-ho-vaw’) Yahweh, (the) self Existent or eternal; Jehovah, Jewish national name of God.’ I, honestly, cannot imagine, in my wildest conjecture, how else anyone could prove to be more intractably rebellious than Cain’s defiant retort of, “I know not: Am I my brother’s keeper?”  Religion tends to garb its adherent in the infamous toga of temerity.

Read part one by clicking here.