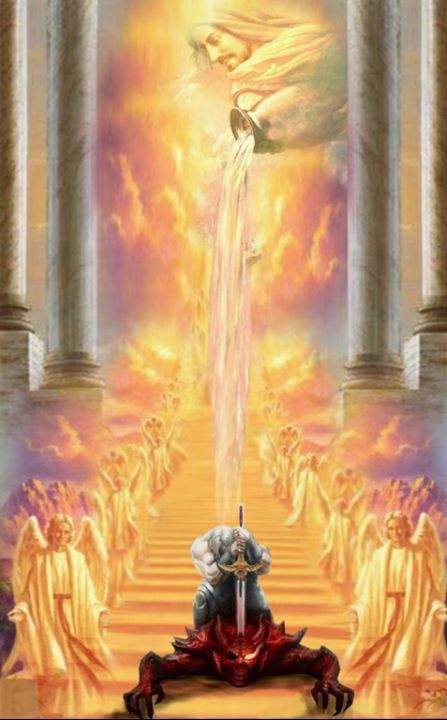 Jesus told us that the Devil “hath but a short time.”

We are still dealing with Buddhists’ beliefs. This is a cull from Encyclopædia Britannica.

The living process is again likened to a fire. Its remedy is the extinction of the fire of illusion, passions, and cravings. The Buddha, the Enlightened One, is one who is no longer kindled or inflamed. Many poetic terms are used to describe the state of the enlightened human being —the harbour of refuge, the cool cave, the place of bliss, the farther shore. The term that has become famous in the West is nirvana, translated as passing away or dying out —that is, the dying out in the heart of the fierce fires of lust, anger, and delusion. But nirvana is not extinction, and indeed the craving for annihilation or nonexistence was expressly repudiated by the Buddha. Buddhists search for salvation, not just nonbeing. Although nirvana is often presented negatively as “release from suffering,” it is more accurate to describe it in a more positive fashion: as an ultimate goal to be sought and cherished. (Encyclopædia Britannica)

Resurrection consummates the work of the gory cross

The children of God do not need to meditate themselves into nirvana. The finished work of Jesus has taken care of proclivities of the flesh. “Knowing this, that our old man is crucified with him, that the body of sin might be destroyed, that henceforth we should not serve sin” [Romans 6:6]. It is up to the individual how he handles his spiritual life.

The word of God warns us in Colossians 3:9 “Lie not one to another, seeing that ye have put off the old man with his deeds;” the child of God is well aware of what to do. The true Christian knows that he is a special species of divine arrangement. He is not alone in his earthly walk. By faith, in Jesus, we are different. Galatians 2:20 says, “I am crucified with Christ: nevertheless I live; yet not I, but Christ liveth in me: and the life which I now live in the flesh I live by the faith of the Son of God, who loved me, and gave himself for me.” My life is hidden, providentially, in Him who was, who is, and is to come.

I am a carrier of the Christ. I am a new creature. 2Corinthians 5:17, “Therefore if any man be in Christ, he is a new creature: old things are passed away; behold, all things are become new.” My past sordidness is lost in extinction. The word ‘new’ is not neos (neh’-os) ‘recently born, young, youthful (speaking of age);’ it is kainos (kahee-nos’). Thayer Definition: ‘new; as respects form: recently made, fresh, recent, unused, unworn; as respects substance: of a new kind, unprecedented, novel, uncommon, unheard of.’ Strong’s Definition: ‘new (especially in freshness.’ The Christian, from the celestial assizes of the Eternal One, is proclaimed ‘fresh.’ On account of this simple fact, he remains eternally fresh. This is what the finished work of the cross has done for us! Praise the LORD!

Is this Buddhist nirvana? Who’s the light therein?

In some early texts the Buddha left unanswered certain questions regarding the destiny of persons who have reached this ultimate goal. He even refused to speculate as to whether fully purified saints, after death, continued to exist or ceased to exist. Such questions, he maintained, were not relevant to the practice of the path and could not in any event be answered from within the confines of ordinary human existence. Indeed, he asserted that any discussion of the nature of nirvana would only distort or misrepresent it. But he also asserted with even more insistence that nirvana can be experienced —and experienced in the present existence— by those who, knowing the Buddhist truth, practice the Buddhist path. (Encyclopædia Britannica)

A FLASH OF THE OCCULT HAND: IT’S BEEN A LONG HUMAN PRACTICE

Buddhism has no answer to the hereafter. The simple reason is that, it has no architectural part in the hereafter design. The Author of creationism has already blessed us with the asseveration of John 14:18, “I will not leave you comfortless: I will come to you.” A wise person, therefore, will get Jesus involved. ‘Comfortless’ is an interesting Greek orphanos (or-fan-os’): ‘bereaved (“orphan”), that is, parentless.’ It also includes those bereft of a (teacher, guide, guardian). You want to know why Jesus used orphanos? The oracular afflatus of Isaiah 9:6 unravels the divinity of this Enigma when it prophetically gives one of His sobriquets as ‘The Everlasting Father!’ The Jews thought father Abraham was the biggest paternal shot until Jesus told them, “Before Abraham was, I am!” Amen!