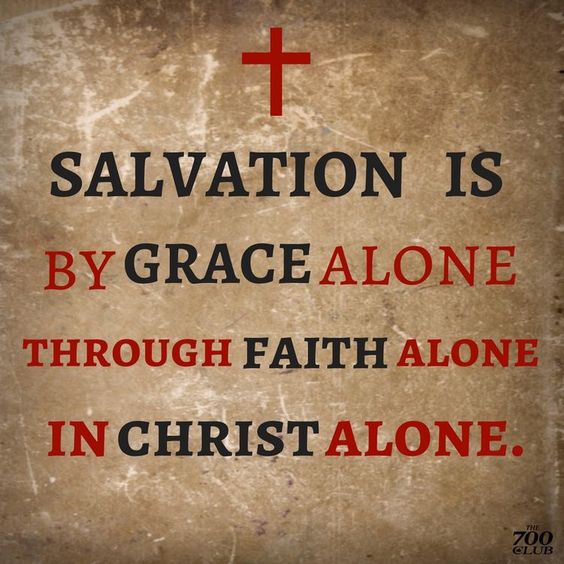 Will You Lose The Genuineness Of Your Salvation? (8)

In the new creation of the Church engenderment, the earnest of the Holy Spirit proves that God puts all He has in the soteriological culmination. Ephesians 1:19-23 19) “And what is the exceeding greatness of his power to us-ward who believe, according to the working of his mighty power, 20) Which he wrought in Christ, when he raised him from the dead, and set him at his own right hand in the heavenly places, 21) Far above all principality, and power, and might, and dominion, and every name that is named, not only in this world, but also in that which is to come: 22) And hath put all things under his feet, and gave him to be the head over all things to the church, 23) Which is his body, the fulness of him that filleth all in all.”

God used His Almighty power to deal with sin

God used all His resources, so to speak, to actuate the regeneration of Adam. The LORD God used money, exchange for business transactions; He also used His ‘entire’ power for the procurement of man’s salvation. The Greek for ‘exceeding’ is huperballō (hoop-er-bal’-lo): ‘To surpass in throwing, to throw over or beyond any thing; To transcend, exceed.’ The next word ‘greatness,‘ megethos (meg’-eth-os), is: ‘magnitude.’ Put huperballō megethos together and what it says is: “target any distance in your wildest imagination and huperballō megethos surpasses it, far, by the farthest distance beyond all imaginations. Think of the most annihilating intercontinental ballistic missiles, it cannot match the power of huperballō megethos – the Almighty power. Four translations of power describes the displayed power that saved us from the hell, meant for Lucifer, his counterpart fallen angels and demons.

The first couched ‘power’ from verse 19 is dunamis (doo’-nam-is): ‘Strength; inherent ability; force (literally or figuratively), latent power; specifically miraculous power (usually by implication a miracle itself).’ The word ‘working’ is energeia (en-erg’-i-ah): ‘efficiency of energy.’ ‘Mighty’ is ischus (is-khoos’): ‘Ability, forcefulness, strength, might – it comes to visibility when act of throwing, lifting, pushing or crushing is needed.’ The second ‘power’, kratos (krat’-os), is ‘vigor’ – easily manifested on men of immense strength. Why would God bother Himself to exercise these shows of incalculable power if the recipient of the grace of salvation stands to lose it?

Do verses 22 and 23 say categorically that Jesus is the Head of the Church and does it reveal that the Church is His mystical body? Did I not explain clearly that the saved soul is the full responsibility of the Godhead? If the Church is His mystical body, does it not behove God to do the Jude verse one needful?  “…to them that are sanctified by God the Father, and preserved in Jesus Christ, and called:” (Jude 1:1). The Father “purifies” for salvation. Jesus Christ is the divine refrigerator that continues in “preserving the regenerate Christian from injury, rottenness and loss,” because that is what the Greek word for ‘preserved’, tēreō (tay-reh’-o) means.

Through the inspired energy of the Holy Spirit, the gospel becomes meaningful; the “call” is made and what does the Father-sanctified and Christ-preserved do? Led by the Holy Spirit the utterance of the prayer of salvation is made from the heart, you get born again and the Trinity takes over the purchased life, and your new life becomes the full responsibility of God; how can it be lost? Has God ever lost anything He truly wants for Himself? Selah!

That which receives the salvation is the spirit of the recipient. As human beings, we must take care of this earthly body by washing it daily. The spiritual aspect of individual’s human tripartite nature does not enter any bathroom for cleansing preservation. God, the Owner of the redeemed, continually does the preservation. Clearly, from the Scriptures above, the Christian is part of the body of Christ. The body of Christ is divinely owned; who looks after it? The Owner, God Almighty, continues to employ His insuperable dunamis, energeia, ischus and kratos to preserve the peculiarity of the Christian’s life – His own body. The Christian is truly blessed to be saved by the grace actuated design of the Author of soteriology. Amen.

Previous Post
Will You Lose The Genuineness Of Your Salvation? (7)