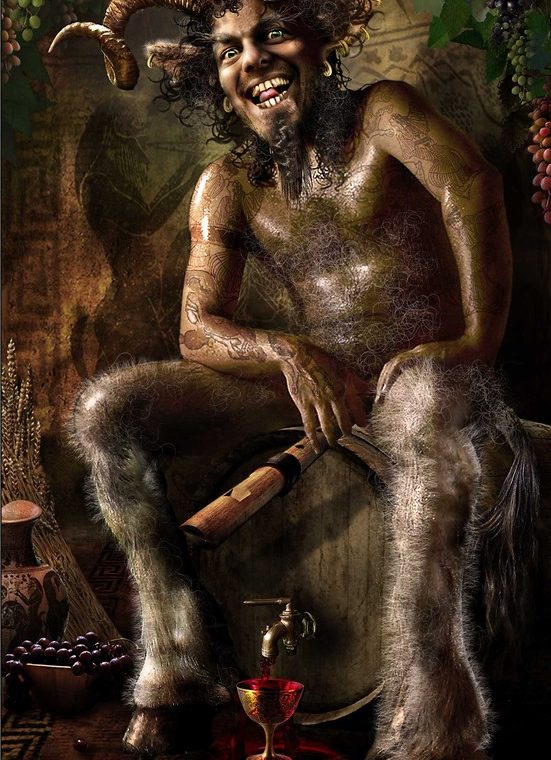 In the Old Testament, ‘devils’ (demons) appear four times. In Leviticus 17:7 & 2Chronicles 11:15 it is called śa‛ıyr (saw-eer’) BDB Definition: 1. hairy (adjective) 2. he-goat, buck (noun masculine) a. as sacrificial animal b. satyr, may refer to a demon possessed goat like the swine of Gadara (Mat 8:30-32). Strong’s Definition: ‘shaggy; as noun, a he goat; by analogy a faun’. Deuteronomy 32:17 & Psalm 106:37 has shed (shade) ‘a daemon (as malignant)’. From the first definition there could be a likelihood of demons having the appearance of satyr, faun or ape; and they should be very intelligent beings indeed. In the New Testament, daimonion (dahee-mon’-ee-on) Thayer Definition: ‘1. the divine power, deity, divinity 2. a spirit, a being inferior to God, superior to men 3. evil spirits or the messengers and ministers of the devil’; Strong’s Definition: ‘a daemonic being; by extension a deity’ (Matt 7:22 & Lk 8:33); and daimōn (dah’-ee-mown) Thayer Definition: 1. a god, a goddess a. an inferior deity, whether good or bad 2. in the NT, an evil spirit’, which comes from δαίω daiō ‘(to distribute fortunes); a demon or super natural spirit (of a bad nature) (found in Mark 5:12 & Rev 16:14)’ are the two Greek words for demon. Jesus never had anything to do with them, “and what communion hath light with darkness? 15 And what concord hath Christ with Belial?” (2 Corinthians 6:14-15). Hear Jesus in Matthew 26:53, “Thinkest thou that I cannot now pray to my Father, and he shall presently give me more than twelve legions of angels?” He explained also in Matthew 25:41, “Then shall he say also unto them on the left hand, Depart from me, ye cursed, into everlasting fire, prepared for the devil and his angels”. The Devil would not dare insinuate a falsehood of demonism in Matthew 4:6, “And saith unto him, If thou be the Son of God, cast thyself down: for it is written, He shall give his angels charge concerning thee: and in their hands they shall bear thee up, lest at any time thou dash thy foot against a stone”. Jesus dealt with the demons as we have in Luke 8:30, “And Jesus asked him, saying, What is thy name? And he said, Legion: because many devils were entered into him”. They are foul spirits in Mark 9:25 & Rev 18:2. ‘Foul’ is akathartos (ak-ath’-ar-tos) ‘impure (ceremonially, morally (lewd) or specifically (demonic))’. They are also called ‘familiar spirits’: ‘ob (obe) ‘(apparently through the idea of prattling a father’s name); properly a mumble, that is, a water skin (from its hollow sound); hence a necromancer (ventriloquist, as from a jar)’.

Spiritists and seers who do not receive the oracular afflatus through the Holy Spirit, in the name of Jesus, are actively working for Satan. They are in league with familiar spirits whose attachment to each clan is an assignment of satanic operation. They can trace your family lineage to Adam easily. Voodooism, according to Collins Dictionary, is a religious cult involving witchcraft and communication by trance with ancestors and animistic deities, common in Haiti and other Caribbean islands. It is ultimately of West African origin; it speaks of guardian spirit, without which there is no voodoo. Hinduism teaches that the Devil is still God’s angel, running messages for the Most High -insinuating a certain rapport between God and Lucifer. Satanic prominence of Hindu religion makes an obvious case for demonic rampancy.

Not unlike all religions, Islamic Qur’an teaches the existence of evil and good demons. In fact the Qur’an has a whole chapter for demons and aptly called Al-Jinn (Arabic word for demon is jinn). Qur’an 72:1 reads, “Say (O Muhammad): It is revealed unto me that a company of the Jinn gave ear, and they said: Lo! we have heard a marvellous Qur’an,” and the 14th verse says: “And there are among us some who have surrendered (to Allah) and there are among us some who are unjust. And whoso hath surrendered to Allah, such have taken the right path purposefully”. In the 46th chapter, called An-Ahqaf, in verse 29 Prophet Mohammad proclaimed from Allah, “And when We inclined toward thee (Muhammad) certain of the jinn, who wished to hear the Qur’an and, when they were in its presence, said: Give ear! and, when it was finished, turned back to their people, warning”; which implies that demons preached to convert in the name of Allah to other demons. …to be continued…

and get part four here