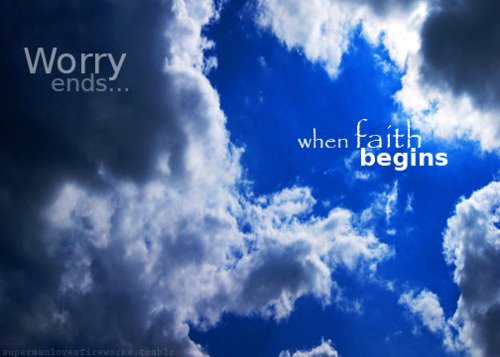 OF TRIALS AND TROUBLES (1st part)

One is expected to be equanimous in times of trials troubles. Even if one has to use aggression in tackling the problem, it will be quite unwise to approach the task with muddleheadedness. Times of trials should also call for sober reflections.

One dangerous and stupid thing you must endeavour to drive far away from your mind is to blame the Lord God for the mishap. This will, most definitely, be one of the traps the enemy of your soul will lay in your paths so as to mess you up so ingloriously. God has given you everything mentally, spiritually and physically to be an overcomer, hence, longing to see you, at the other side of the trial, a victorious one and causing a broadening of His Divine smiles. So many things will gate crash your thinking faculty, each probably being of the promotions of the enemy, trying to gain the mastery of your mind. You will hear yourself say so many things, so uncomplimentary to the faith in the Jesus you profess. Amid the cacophonous ideas, always, is this still, reassuring words of scripture and it will take a heart of equanimity to fish out God’s word for appropriation. Amen.

The very second Adam the Woman heard the slanderous words of Genesis 3:4-5, “And the serpent said unto the woman, Ye shall not surely die: (5) For God doth know that in the day ye eat thereof, then your eyes shall be opened, and ye shall be as gods, knowing good and evil”; she should have tied up the snake in several knots, binding it to that tree. The first Woman, tragically, in her reckless attachment to satanic cacophony chose the ruinous path for mankind.

Cain, no doubt, heard of the satiation of the glamorous comfort their parents luxuriated in just before the parturiency of him. “How can you give birth to me in this squalor enclosed dejection?!” He continued, “I’ll rather you never allowed my entrance into this”, spreading his wide arms around the abode he grew in. Cain had been listening, with an ominous rapt attention, to the evil one. He had taken a step further than his own mother, seen eye to eye with the evil ophidian spirit and had resolved to treat the God of his parents with disrespect. Cain failed; he disappointed himself in his refusal to obey God. An obedience to God’s stand would have opened the floodgate of the enablement to champion the cause of Jehovah in his own generation. This is what God, the good One, expects of every creature of His. Cain allowed his trial to trouble him because the one who had failed eternally continually seeks hellish companions and Cain foolishly accepted to be his ally.

Drunken father Noah and his children

“And he said, Cursed be Canaan; a servant of servants shall he be unto his brethren” Genesis 9:25. Noah did not think thrice to curse his grandchild. He did not ask himself why he licensed himself to stupor with the redness of the grape. The act brought his two other sons stepping backwards toward the covering of a drunken Noah. Israel and Europe respectively represented by Shem and Japheth by the backward trek are in a backslidden state, today, spiritually. If you love to hit the bottle very hard that is where your trial springs from. You cannot be spending every evening with your dear liqueur drinking friends. Do not replicate father Noah’s error. Noah should have sensed the power of the sting of the delicious red juice and its tempting propensity. He failed. Must you fail as well? My passionate plea is, “Don’t!”

Granted that Lamech dwelt in Cain’s city of sinfulness. It is clear that he acknowledged the supremacy of God’s judgment in his famous Genesis 4:24 acquiesce of, “If Cain shall be avenged sevenfold, truly Lamech seventy and sevenfold”. Lamech had an opportunity to do a volte-face but chose to replicate the evil works of his progenitor. When we fail in any trial, God expects us to come to Him in a supplicatory mood with a solemn view of correcting the spiritual imbalance. But for the grace of God, Adam should have just perished. Check the scriptural account of the original sin, he did not, for once, ask God to forgive him. God, out of His sovereignty, chose to garb Adam and his wife with the raiment of righteousness which gave them the gracious second chance. Satan sees the trial as an occasion to welcome us into his hellish abode. Be smart, wash your sin-stained hands at the feet of Jesus. No one loves you more, can ever love you more or is capable of turning your trials into sweet choruses like Jesus. Only Jesus can save! (…to be continued…)