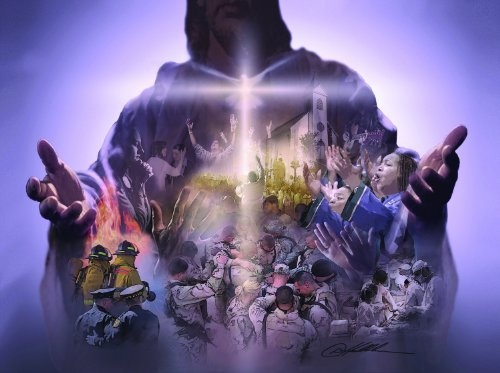 HE’S GOT THE WHOLE WORLD IN HIS HANDS – JESUS I know of a mighty angel, the first of all musicians of creationism. He was the greatest among the stars of heaven, God’s abode. God’s paradise, the third heaven, is an assizes, therefore, anyone’s grandeur and eminence must have the legal endorsement of providential Divinity. Lucifer was so glorious that he was the epitome of shining brilliance among the mammoth array of stars of the heavenly throne room.

Lucifer knew the best of implanted words to panegyrize the High and Lofty One seated on the throne. He led the heavenly host in praise and worship. Ten are the most splendid jewels of his outward physicality, summing up the totality of beauty (Ezekiel 28:12-13); and inside his being are the two musical facilitating instruments. Ten plus two equals twelve, the number of Christ, his Creator. Lucifer the great was made to worship the One from whom he came, and for Him who created him. His stardom was hailed in heaven and throughout the universe, so was his beauty, power and wisdom. God made music for His own worship. The stardom of Lucifer is hence to the glorification of the LORD! That takes us to number ten (which stands for trials). Lucifer did not know that the ten jewels of his creation was to test his loyalty to his Creator.

Lucifer was the head, not of a hundred angels, and definitely for more than a thousand, in fact he was not head of much more than a million, but, of billions of angels. Lucifer could not manage his stardom. Rather than humble himself and live a life that will prove to the One who sees the intent of the heart, he tried to promote himself surreptitiously, to the post of deity. The heavenly Judge refused to endorse his nefarious act, which made him to take a more procacious step of an open declaration of his wicked design. The remaining two-thirds angels staged a confrontational solidarity in support of Christ’s rule in complete rejection of the putsch of Lucifer’s whim. Lucifer lost, becoming Satan, the Devil: a celestial outcast.

Lucifer, the musician, lost his celestial estate (Jude 1:6), see nothing good in the Devil.

Down the earth Satan and his putsch cohorts were cast; he wasted no time in appealing to the living occupants of the earth then. Lucifer sang gloriously from nation to nation, from coast to coast, staging musical concerts. In those shows he sang sonorously of not being appreciated in heaven. He appealed to the emotions of the earthly population who foolishly sympathized with him and accepted him en mass, making him the lord and god both of the fallen angels and the earthly beings whose apostasy made God to turn them into disembodied spirits: the birth of demons. These same demons are now the angels (i.e. messengers) of Lucifer, carrying out his caprices in today’s earthly music industry.

In Western Nigeria is the home of Juju music. The maestros of this genre: I.K. Dairo, Ebenezer Obey, Sunny Ade and Sina Peters to mention a few, in all honesty, will tell you of the diabolism they had to embrace in the course of stardom. Greater musicians like Fela, Osibisa, Angelique Kidjo and Bob Marley are so close to the spirits of Lucifer that you would not hear them sing about the redemption of the lost soul of man, as a derivation from the oracle of biblical scripture. They have been initiated into the occult; they must take performance enhancing substances for stage confidence and strength. It is believed to be the norm for them to serve as drug couriers during the music tours, which are truly bankrolled by satanic powers that be.

It is an open secret that universally famed artistes have paid the satanic dues. The great and unmatched Michael Jackson would not say, “No”, to Luciferian stardom, quite unlike the celestial arch angel Michael, who led the good angels against one whole third (like five billion) of the angels that Lucifer was able to deceive into his leadership. His demonic charisma made it easy to recruit the powerful singer, Whitney Houston, leading her to an untimely death, and not even was her tender aged daughter was spared soon after her death. (…to be continued…)