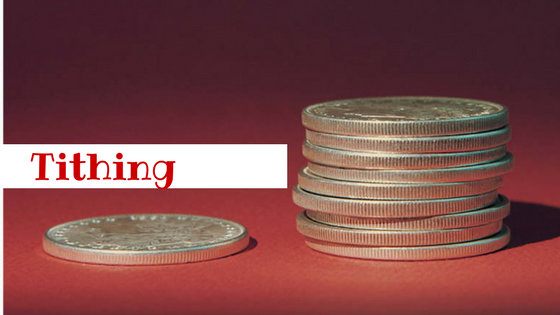 (6)            The first ever tithe of Genesis 14:20 was in gold (a means of business transaction). Tithes, in Hebrew is ma‛ăśer (mah-as-ayr’) ‘a tenth; especially a tithe’; and ma‛ăśer comes from a root word ‛aśar (aw-sawr’) ‘ten (only in combination), that is, the “tens”; also (ordinal) a “tenth”‘; which also comes from ‛eśer (eh’ser): ‘ten (as an accumulation to the extent of the digits)’. Where ‛eśer comes from is: ‛aśar (aw-sar’) ‘to accumulate; to tithe, that is, take or give a tenth’, and ‛aśar is identical with ‛ashar (aw-shar’): ‘A primitive root; properly to accumulate; chiefly (specifically) to grow (causatively make) rich’. Tithes, therefore, interestingly, means riches. Jacob, having struck a providential deal with God in Genesis 28:22 decided, “….and of all that thou shalt give me I will surely give the tenth unto thee.” Where do you think Jacob got that prosperity formula from if not from his good grandfather, Abraham? God definitely did not tie him (Jacob) with any tithing law or did He?

Tithing is of the Church!

This is the most important reason why tithing is of the Church. I did not see it until my Pastor, Rev. Chris Okotie, showed it to the congregation on the 3rd of March, 2019. Let us look at the Pauline Book of Hebrews. “And here men that die receive tithes; but there he receiveth them, of whom it is witnessed that he liveth. 9) And as I may so say, Levi also, who receiveth tithes, payed tithes in Abraham. 10) For he was yet in the loins of his father, when Melchisedec met him” [Hebrews 7:8-10]. Now, the ‘here’ of the eighth verse points to the Mosaic instituted Levitical priesthood; while ‘there’ is of the eternal stance of the priesthood after the order of Melchizedek. It is a good thing poring over what one learns from Church, as Rev. Chris Okotie has always enjoined. In my perusal, some questions popped up. Which of the priesthood is nobler, Melchizedek’s or the Levitical order? Of whose priesthood has the superiority, Levitical or the one according to the order of Melchizedek?

“And without all contradiction the less is blessed of the better” [Hebrews 7:7]. The blessing from the priesthood of Melchizedek gives him a nobler personality role than, the tithe giving, faithful Abraham. This is the first element of Melchizedek’s superiority. If as verse 9 above, “And as I may so say, Levi also, who receiveth tithes, payed tithes in Abraham,” expounds, then Levi, the tithe collector from Jewish votary did not only receive what Abraham, his progenitor, received (the priesthood blessing that makes Melchizedek the better); he has continued to pay tithes, in Abraham, to Melchizedek. This is another fact of superiority of Melchizedek’s office. How do I know this fact? “And here men that die receive tithes; but there he receiveth them, of whom it is witnessed that he liveth” [Hebrews 7:8].

On account of death, the first high priest from Levi, that is Aaron, was replaced. Up until the time of Pauline scripting of the Book of Hebrews, death had brought about an ineluctable replacements to that office. But of Melchizedek, whose natural genealogy the Scripture is silent about, is absolutely antitypical to the office of the Lord Jesus. The Holy Spirit, through Paul, teaches that this king-priest Melchizedek, said to be figuratively living, undying like the eternal Jesus, continues to receive tithes. How is this possible? It is a theological issue. Melchizedek signalizes the true High Priest, even the Initiator of the Old and the New Testaments, the Lord Jesus, the Alpha and the Omega; the One who was, is, and is to come, the Almighty.

If Christ is our High Priest, and one of His priesthood functions (in order to pour forth His Providence) is a la tithing, and the indubitability of His body on terra firma happens to be Christians, then the only place of storeroom tithe collection is none other than the Church. Where else? Selah!